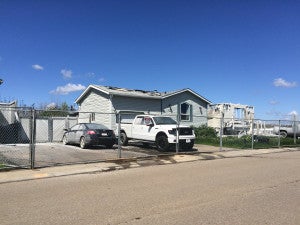 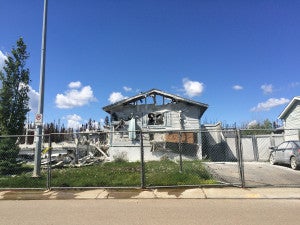 Effects of the biggest wildfire ever experienced in the province of Alberta, Canada include burned houses, cars and surrounding trees. Residents have begun returning to Fort McMurray June 1. CONTRIBUTED

They had felt hesitant to come back to Fort McMurray and had thought about starting anew in the city where they stayed in the last four weeks. Airdrie, 710 km south of Fort McMurray, kept them safe and presented them with new possibilities. But they chose to come home to Fort McMurray.

On May 3, it was as if hell had come down as Fort McMurray was burning wild, said Bulandan. “But still we are back and ready to start and rebuild the city again,” he added. The fire spared their rented house where they have lived for seven years, in Timberlea, one of the communities gutted down by the fire.

They evacuated their home May 3, and a friend in neighboring Lac La Biche town took them in for three days. They then moved to Airdrie and stayed there until they were allowed to return.

The couple overcame the hurdles of being evacuees for four weeks but initially found it challenging to find a temporary shelter. Still, the couple is thankful that help was easy to find anywhere they went.

“While we were away from Fort McMurray, we missed our bonding with our friends who we have treated as families. But [our other] friends came to visit…we spent our time with them,” Bulandan said.

Bulandan, who works as a machine operator at Northland Forest Products Ltd., a sawmill, returned to work June 6. Mary Ann works there too.

Meanwhile, the Filipino Canadian Association of Fort McMurray requested the local government to raise the Philippine flag at the city hall to commemorate the country’s 118th independence from June 11 to June 12, said the organization’s vice president Flor Connors. 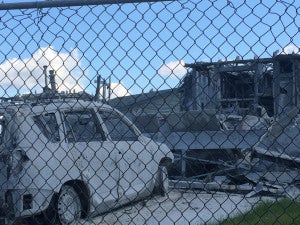 Re-entry for residents is being carried out in phases beginning June 1 and will finish June 21. Unfortunately, the Connors will have to wait until the air quality in the area is safe for their children who have asthma.

The good news is the Connors’ home for 22 years stayed amid the fire. “Awa ng Diyos, livable daw ang bahay namin (By God’s mercy, our house is still livable),” said the 51-year-old mother of two.

The family is planning their return this week. “We are going to stock up on food and drink supplies for two weeks before we hit the road,” added Connors.

“It is a wait and see what extra work awaits us,” she said.

Town services are slowly being restored, the provincial government reported. Schools in the area will re-open in September while health care services, including emergency services, are now available. The Fort McMurray International Airport has also reopened offering only limited commercial flights.

The wildfire is now 73 percent contained according to provincial government updates and estimated to cover 589,995 hectares including the Saskatchewan side.

Read Next
Human rights warrior vs. CPP founder: Two portraits of the Left
EDITORS' PICK
Lacson wants DOF to suspend TRAIN law as oil prices rise
153 protests filed vs China actions in PH waters in 2021 — DFA
Delivering delight against all odds
Leaked: A 60x Zoom and all-new Helio G96 mean a complete overhaul for TECNO Mobile’s new CAMON 18 series
Malls, parks in NCR still off limits to minors even with eased restrictions
Next level mobile photography within reach with vivo X70 co-engineered with ZEISS
MOST READ
Matibag calls Senate budget hearing ‘political,’ gets kicked out
Duterte inaugurates P684-M bypass road project in Quezon
Robredo to supporters: Be calm, gentle and do good deeds
Cristine Reyes opens up on her trauma from abuse, painful childhood
Don't miss out on the latest news and information.