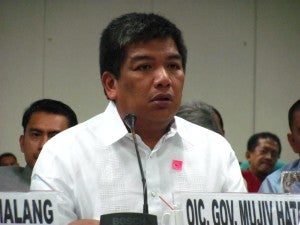 Hataman said he was deeply saddened by the killing of the captive and called on all Muslims to “let us stand together as we build and rebuild our faith in the midst of those who try to tear us apart.”

“We express our deepest condemnation against this act of pointless violence and terrorism,” Hataman said in a statement released here Monday, hours after Hall was reportedly beheaded as his family failed to meet the ransom demand by 3 p.m.

Hataman said the beheading happened barely a week since Ramadan began “and it is appalling that this holy month we set aside for prayer and reflection has already been violated by extremists here and abroad, as they wage violence in the name of our faith.”

He told fellow Muslims that “the refuge and shelter we share as Muslims has become a strange place for others. Extremists claim to follow the faith while they go against Islam’s message of peace and humanity.”

Referring to the extremist groups that have been operating mainly in one of the five provinces of ARMM, Hataman said “their betrayal of Islam knows no bounds that even in the most holy days of Ramadan, they turn a time meant for prayers and contemplation into days of fear and horror.”

“This is not what Islam stands for, and we refuse to let this turn us against our fellow Filipinos – not at a time when Ramadan teaches us sympathy, compassion, and love,” the ARMM executive said.

He described the Abu Sayyaf as people “who tread the path of violence and claim to do it in the name of Islam.”  They “are, without question, merely men of sin who distort a faith that stands for peace,” he added.

“They are not our people,” he added.

“As Muslims, we are taught that to kill one man means to kill all of humanity, and to save one man means to save all of humanity. It is then imperative for us work to together as Muslims in making sure that the criminals behind these acts of violence are made accountable to our people in the courts of law, and to save those who might fall into the hands of these men who do nothing but evil,” Hataman said.  SFM