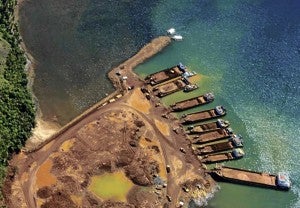 This is the port in Claver, Surigao del Norte, where minerals and mining products are loaded into barges. Surigao del Norte is known for its nickel ore areas. (Photo by DANILO V. ADORADOR III/INQUIRER MINDANAO)

“I’m not afraid of mining here in Surigao. The mining industry is, I think, implementing what we call responsible mining,” Matugas said in an interview with local journalists on Tuesday.

Matugas’ statement came after President-elect Rodrigo Duterte singled out the province as a haven of irresponsible miners whose operations are wreaking havoc on the environment.

The governor surmised that Duterte might have singled out the province because of Caraga Region’s status as the country’s de facto mining capital. At least 23 of the 44 producing mines in the country are operating in the region, according to the 2015 data from the Mines and Geosciences Bureau (MGB).

“Maybe he (Duterte) thinks that all mining activities are sources of environmental problems. Maybe that’s his impression,” said Matugas, who was reelected in the last elections for a final term under the Liberal Party (LP). The governor’s husband, outgoing First District Rep. Francisco Matugas, chaired the House committee on natural resources, which tackled legislation related to the mining sector.

In some twist of irony, however, the governor’s defensive tone appeared to differ from that of the head of the Chamber of Mines-Caraga Region, Inc. (CMRI), who has called on the incoming administration to “punish irresponsible miners.”

“There are good ones who religiously comply with the law, but we can’t deny that a few have been remiss when it comes to environmental protection,” said Dulmar Raagas, president of the Chamber of Mines-Caraga Region, Inc. (CMRI).

Raagas declined to name the Surigao del Norte large-scale miners who have violated laws and damaged the environment but offered that irresponsible miners “can easily be distinguished from the majority who are responsible through honest and unbiased audit.”

Blatant environmental violations, he disclosed, have become widespread among large-scale Chinese mining operators in the region.

“Based on existing laws and regulations, the next administration should do a nationwide audit on all mining operations to separate the good from the bad,” he said. “Those who are found negligent should be suspended.”

It was not the first time that Matugas has taken the cudgels for mining firms in the province, even those who have been found to be polluters. In 2012, Matugas interceded in behalf of a suspended Chinese nickel firm found to have converted the shoreline into a waste pond. In a letter to Environment Secretary Ramon Paje on Oct. 22, 2012, the governor requested that Shenzhou Mining Group Corporation’s (SMGC) ore stockpile be shipped to prevent it from causing “environmental hazards” due to “heavy rains.”

Three months before Matugas wrote the letter, the SMGC had been suspended following the discovery by DENR that the Chinese firm had built a giant settling pond on the shoreline to act as a “last-stage siltation control.”

A siltation or settling pond is a structure where silt-laden discharges are impounded temporarily to allow waste materials to settle down and for water to overflow silt-free.

Five months after the governor’s request, MGB Director Leo Jasareno ordered on March 25, 2013, the issuance of ore transport permits for the four shipments of stockpiled ore to China.

That earned SMGC— despite being suspended for flagrant environmental violations — some P174.9 million, according to MGB record.

Asked why the MGB and DENR ordered the shipment instead of simply requiring SMGC to employ safer stockpiling methods to contain siltation, Jasareno told the Philippine Daily Inquirer by phone that the agency “merely” acceded to the request of the provincial government.

Jasareno added that the shipments were “purely for environmental purposes” and that the suspension order against SMGC had remained in effect.  SFM