In and out of the ring, Muhammad Ali did just that. And now Death has stung Ali, at the age of 74—afflicted by Parkinson’s, complicated by pulmonary illness, his motor skills, once the epitome of grace, now forever inert.

A mall named after him stands right by Araneta Coliseum, in Quezon City—the coliseum where on a steamy night in October of 1975 he fought Joe Frazier for the third time and barely survived, winning when Frazier’s corner wouldn’t allow their man to come out for the 15th and final round, handing Ali the match by a TKO. By then Frazier’s left eye was shut, his right arm in excruciating pain and all but useless. Ali himself said this was as close as he got to dying.

It was brutal, this gladiatorial combat, two ring-savvy fighters with opposite styles, out to annihilate the other. The “Thrilla in Manila” was so-called after the cruel taunt Ali, so adept with his put-down rhymes, made up to mock Frazier, that the fight would be a “killa and a chilla and a thrilla, when I get that gorilla in Manila.”

The third and final match between the two focused international attention on the city and the country, giving Ferdinand Marcos, then on his third year of martial-law rule, much needed favorable press. According to an AP report, Marcos was supposed to have said on that occasion, “I want the world to see that we have peace and order, people are happy, the economy is doing well, and the country is moving forward.”

Nothing could have been further from the truth, of course. Ali versus Frazier was the regime’s bread-and-circus for the masses, deflecting at least for that moment criticism of a dictatorship that routinely engaged in human rights violations, torture and extrajudicial killings and, with its massive crony-style corruption, forced the economy to its knees.

The fight in the ring was a fair one. That outside made of the nation a punching bag. 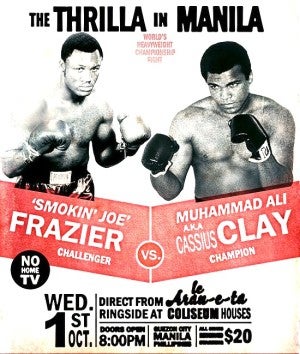 It was an amazing, chaotic scene: half of the packed theater was made up of Frazier fans, the other by Ali’s followers. Each time either man landed a blow, the respective section would erupt in cheers. We were pro-Ali so we stood behind the rows of Ali supporters and cheered along with them. The fact that the referee was Carlos Padilla, a Filipino, made the fight even more unusual.

Ali was a great athlete, to be sure, and one of the best boxers that ever lived. But that is not the main reason why I write this. If I could, I would ban boxing. It beggars the imagination to view attempts to knock someone’s brains out as a sport On the other hand, without boxing, we may never have had Ali.

He was also a great man, a flawed human being, to be sure, but unafraid to speak truth to power even when it cost him. Outside the ring Ali fought for his beliefs, which included shedding what he called his slave name, Cassius Clay; his conversion to Islam as a member of the anti-integration Nation of Islam (which he later left); and refusing in 1967 to answer the draft and fight in the Vietnam War and subsequently being active in the antiwar movement.

He declared that he would not take up arms for a war that did not make sense. “My conscience won’t let me go and shoot them. They never called me ‘nigger’, they never lynched me, they didn’t put no dogs on me.” This talk from an uppity black man was simply unacceptable to white America. He was convicted, stripped of his title, and prevented from boxing for three and a half years—his peak years.

Only when the Supreme Court overturned his conviction was he able to return to the ring. Then followed the three fights with Frazier, and the “Rumble in the Jungle,” in Zaire, when in 1974 the master boxer took a towering, muscular, younger, seemingly invincible George Foreman to school, winning by a knockout in eight rounds.

At the time that he refused his induction, I was vaguely in favor of the war—I say “vaguely” for though it wasn’t clear to me why the U.S. was in Vietnam I had yet to learn about the history of American imperialism, particularly the 1899 Philippine-American War that foreshadowed U.S. adventurism in Southeast Asia. Only later, living in New York at the start of the 1970s, and witnessing the ferocious rift between the antiwar movement and those fervently supporting the war, did I begin to appreciate the enormity of what Ali had done. By then, I had started to read up on the 1899 War (never mentioned, let alone discussed, at the Ateneo de Manila University), discovering part of the larger and largely hidden context of my own and my country’s historical provenance.

My knowing about those two wars, separated by more than 50 years but inextricably linked, cast Ali in a vastly different light. He was a modern-day David Fagen, the buffalo soldier (as African Americans in the U.S. Army were called then) sent to fight the Filipinos in the 1899 war. Fagen, realizing how racist the war was, defected to Aguinaldo’s forces to become a deadly thorn in the American side. Both men were fighters for racial equality and justice. I can picture them now, laughing and trading stories on how to sidestep punches thrown or bullets fired by a society rife with inequity and still in the clutches of racism.