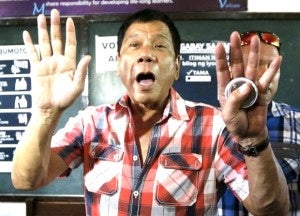 A key feature of President-elect Duterte’s unorthodox leadership style is now clear and can be summed up in one word: duro.

That’s the streetfighter tactic of hitting back with forceful, shocking pronouncements aimed at either silencing or humiliating opponents or critics, or even keeping allies in line.

Activist and novelist Ninotchka Rosca spoke to this in an insightful essay in the New York Times in which she called Duterte “a man of the duro — the piercing retort to intimidation — which is how one faces public ridicule or criticism, deserved or undeserved.”

“The duro tests how far opponents will go in response. Will they go ‘amok’ and take it to the edge, or fall silent? This is how respect, and shame — ‘kahihiyan’ — is framed in the culture. ‘Bigyan ng kahihiyan,’ as it is said in the Philippines: Do not accept disrespect in public.”

In fact, in hitting back at any form of disrespect, real or imagined, Duterte sometimes would not even bother trying to prove you wrong — he would actually embrace your accusation and say he’ll prove you right.

Here’s one way to illustrate it. Imagine a street tough, a siga, confronting another siga, “E tarantado ka pala e.”

The duro Duterte-style response is: “Talagang tarantado ako. Papatunayan ko pa sa ‘yo!” followed by an expletive or two.

Now, in the example, Siga No. 1 has three choices.

He can shut up and back off, escalate the confrontation into a violent brawl or he can simply defuse the situation with: “Kung tarantado ka, e di pareho pala tayo. Tara inuman na lang.”

This is how his staunchest supporters want the rest of the nation to react to Duterte and his recent wave of shocking statements from declaring that murdering corrupt journalists was okay to telling the United Nations to f— off.

They want Filipinos to either shut up or simply shrug and say, “Oh, Mr. President-elect you’re too much, you’re such a maverick,” or “Kuwela talaga itong si Digong, talagang pranka magsalita. Nakakaaliw.”

A Facebook friend and Duterte supporter put it this way: “We, Duterte supporters, have filters in our ears. We do not mind his ladies man antics, his display of machismo, his cursing, his irreverence of religion, because what we want from him is to clean up the government of corruption and reduce or repress crime and drugs.”

Another Facebook post told Duterte critics: “Give him a chance to prove himself…! Never mind our sensitivities… I can endure all insults for the poor and country.”

There’s no debating that the nation must give the new president a chance. It’s not like we have any choice.

But his supporters fail to see an important point: Even though many of the things he says shouldn’t be taken literally, Duterte’s pronouncements can have, and are probably already having troubling, even disastrous, consequences.

The Duterte era has already begun!

Somewhere in the archipelago, women victims of violence have become more reluctant to come forward and speak out because they see the country’s new leader casually cracking jokes about rape and playfully coming on to a woman reporter in public.

Yes, corruption in media is a problem. Do I believe Duterte is about to go on a killing spree to fix this? Of course not.

But in provincial cities and barrios, power-wielders with little or no respect for press freedom — mayors, governors, military commanders or police chiefs, or maybe even barangay tanods — are cheering Duterte’s vague, sweeping declaration that targeting “corrupt” journalists for assassination is perfectly fine.

Yes, we should give Duterte a chance. But Ninotchka Rosca’s words are worth repeating here: “The duro tests how far opponents will go in response. Will they go ‘amok’ and take it to the edge, or fall silent?”

Going amok and taking it to the edge doesn’t make sense right now, of course.

But neither does falling silent.