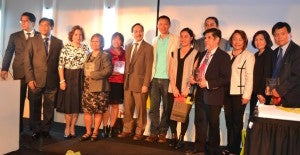 SAN FRANCISCO – Entries are being accepted from June 1 to August 1 for the Fifth Plaridel Awards, the Philippine American Press Club USA (PAPC) announced.

The Plaridel Excellence in Filipino American Journalism Awards is open to journalists whose articles/broadcast production saw print or were shown in a Filipino American based media anywhere in the U.S. between June 1, 2015 to May 31, 2016.

Awards will be given to the best stories and articles that provide unique perspective on the issues and concerns of Filipino Americans.

For Broadcast TV- Community Reporting and Personality Profile. For Radio: Community Programming. Photojournalism and Tourism stories are also accepted. There is a maximum of two articles per category. Submissions must come from the journalists themselves and not the media organization.

This year’s awards will be held on Friday, October 7, at the Kalayaan Hall of the Philippine Center on Sutter Street in San Francisco.

A round trip California-Manila economy ticket donated by Philippine Airlines was raffled to the The Plaridel winners, and the lucky Manila bound winner was Myles Garcia who confessed he hasn’t been home in 11 years.

Christina Oriel who won the Best Tourism Feature Story won a two-day stay at the new Hotel Centro in the island of Palawan, courtesy of Mango Tours.

The Plaridel Awards was named in honor of Marcelo H. Del Pilar, a Filipino patriot, journalist and publisher who brought his craft and zeal as an expat in Europe in late 1800s. Plaridel was his pen name. Del Pilar was a prolific writer who kept his constituents abreast with the goings on in their expat community as well as in their homeland. In him PAPC has found a hero – a person to emulate and an inspiration to Filipino writers and publishers everywhere who continue their journalistic aspirations and service to their constituents in the new land they now call home.

Esther Chavez, President of PAPC, said that the response of Filipino American journalists to the Plaridel Awards has been overwhelming and gratifying. News reporting and articles submitted have greatly improved since the Plaridel Awards started in 2012.

Plaridel awards was established to acknowledge and celebrate the contribution of outstanding writers and publishers in the Filipino American community, as they chronicle the lives and times of their compatriots, promote and share their culture and history, champion their causes and provide a venue where readers and listeners can voice their concerns, and ideas for the betterment of the community and society at large.