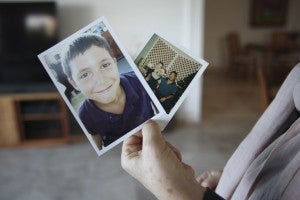 In this May 10, 2016, photo, Susan Callahan holds photos of her son Aron at her home in Honolulu. Her son is one of dozens of Hawaii teens who are sent out-of-state for treatment for mental illness because they can’t find the proper treatment in the islands. AP/MARINA RIKER

HONOLULU — Within months of starting the process of adopting her son, Susan Callahan knew something was wrong.

Aron, who was 7, had trouble communicating and started getting violent at home and school, trying to hit his mother and teachers. Callahan took him to a psychiatrist, where he was diagnosed with a range of conditions, including post-traumatic stress disorder and developmental disabilities.

Desperate, his parents sought help from the state. But when Aron finally found adequate care nearly a decade later, it was not in Hawaii but more than 3,000 miles away, at a specialized facility in Kansas.

It’s a story that has repeated itself hundreds of times over the past two decades in Hawaii, where outreach workers and health care providers say many children and teens struggle to find proper mental health care.

Often, the state Health Department ends up sending severely mentally ill children and teens to the mainland for treatment, away from the support of friends and family.

Aron, now 18, was in and out of Hawaii psychiatric hospitals and residential treatment centers for years. Yet he continued to struggle with mental illness, sleeping as little as two hours a night and sometimes still becoming violent.

But once he was sent to Kansas for treatment, things started getting better.

“The great thing is, my son is finally making progress in therapy and school,” Callahan said. “The sad thing is, he has to be on the mainland to do so.”

Hawaii showed improvement after being placed under the so-called Felix consent decree, which followed a 1993 lawsuit filed on behalf of disabled Maui student Jennifer Felix. The lawsuit alleged the state broke federal laws that required it to provide services to mentally ill students.

But gaps in services remain. The state has no secure residential treatment facilities and has only two psychiatric hospitals for teens, both on Oahu.

Up to 38 kids were sent out of state for treatment following the Felix consent decree, Health Department data shows. But as services increased in the state, that number dropped to fewer than 10 per year. Over the past couple of years, however, it increased again to the mid-20s.

Fallin said the department is applying for a grant to help boost services on the islands for severely mentally ill kids.

Outreach workers and mental health providers say the lack of community-based mental health services is becoming as bad as it was before the federal lawsuit. Meanwhile, Hawaii has one of the highest teen suicide attempt rates in the country, according to the U.S. Centers for Disease Control and Prevention.

“There were a lot of services with the Felix decree, but they’ve been cut back,” said Robert Collesano, director of Mental Health America of Hawaii’s Maui branch. “They’re slowly inching up, but it’s nowhere where it used to be.”

This leaves suicidal or mentally ill teens waiting for hospital beds and struggling to find care with a shortage of psychiatrists, Collesano said.

Meanwhile, before teenagers with more severe problems can be sent to specialized programs on the mainland, they get stuck in programs that aren’t fit to treat their disorders. These teens go through an average of three treatment programs before they’re sent out of state, according to Fallin of the Health Department.

“They have to exhaust the state resources first, and sometimes they may not be the absolute correct fit,” said Jennifer Patricio, an attorney at the Hawaii Disability Rights Center.

That was the case for Aron, who was moved through multiple programs and spent months in an Oahu psychiatric hospital before heading to Kansas.

“For years, I have been trying through our Hawaii state agencies to get the services Aron is supposed to get from them,” Callahan said. “And not only has he not received them, he has been hurt. Aron was just warehoused and hurt.”