It’s not THE famous bells, but it’s a Filipino one 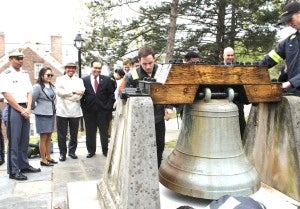 The celebration of Memorial Day in America coincides with the return of a special bell to the Philippines.

But it’s not one of the famed Balangiga bells taken to America after the Philippine-U.S. War.

This one is the San Pedro bell, another wrongly taken bell. Just not one of the famous ones.

You Philippines geography buffs will note that Balangiga is in Samar.

But the San Pedro bell is from further north, and was taken from the Church of Saint Peter and Paul in Bauang, La Union.

Not to be confused with any belle from Ilocos with Miss Universe dreams.

But please note the bell that’s ringing in La Union as of May 23rd is part of the overall effort of Americans and Filipinos to get all the bells taken during the Philippine-U.S. War returned to their native land.

This Ilocano Bell came mostly from the efforts of Dan McKinnon, 82, a retired U.S. Navy rear admiral who served at Subic Bay, and now writes as a military historian. Two years ago, he began to research the Balangiga bells of the Church of San Lorenzo de Martyr in Samar.

Those are the famous ones, two bells being held at F.E. Warren Air Force Base, and a third in an Air Force base in South Korea.

He immediately contacted Father Ronald Chan of the Diocese of San Fernando of La Union, and the good father dashed off a letter last November to West Point.

Chan identified the bell as given by Lieutenant Governor Balancio in 1883 to a Spanish Friar named Mariano Garcia, church pastor from 1877 to 1887.

“We are not exactly sure how our San Pedro bell found its way to your highly respected school, but we believe it was taken from the church during the Philippine American War and was then transferred to the U.S. by an American Army officer, Thomas Barry,” wrote Chan. “He served here during that same time period. Sometime after his return to the United States he was name the 27th Superintendent at your school. Perhaps your historical data could shed some light on this?”

Chan mentioned that precedents for return are clear. Bells that were found gifted to schools such as the Naval Academy, VMI and Harvard have all been returned to their respective lands or origin, Japan and Russia.

But not any Philippine bells.

Church property is considered personal property and not subject to military confiscation.

For bells to be taken as a war “souvenir” is not just immoral, it’s illegal.

The letter’s claims were confirmed, and West Point didn’t hesitate sending the San Pedro Bell which arrived a week before Memorial Day.

Happy ending? Not quite.

The story is just beginning. What about those Balangiga bells still in Wyoming and South Korea?

McKinnon is still trying to get them returned to the Philippines. But Wyoming continues to put up a big fight.

This week I connected with the person thought to be the only living daughter of an actual American fighter who was at Balangiga.

Jean Wall told me after all these years she wants to resolve the issue.

“I strongly believe at this time we, all parties, should work toward a compromise of sharing the bells,” she told Emil Guillermo Media. “There are three bells, all believed to have been in the belfry tower at Balangiga, one with Company C, presently in traveling museum with Company C and the two in the memorial structure on the base in Wyoming.  We have three involved parties and three bells. Seems simple enough to share, let Company C keep control over its bell until they may decide at a later time as to what should be done with it, keep one bell as a memorial here, and send one back to Balangiga.  Out of the two bells currently in Wyoming the 1889 bell has an irrefutable inscription linking it to Balangiga and should go back.  The 1863 bell does not have the same inscription and could remain.  At such a time that an agreement could be reached suitable plaques should be applied updating old and making mention of those men by name who fought and died at Balangiga.  And by doing that it would then be in a category of a memorial to be recognized and honored on our holiday that remembers all our veterans.”

“The bells have no significance for me on Memorial Day, nor did they for my father,” Wall told me as we approach the holiday in the U.S. “We honor our fallen heroes on that day, each one for their contribution to preserve and protect our liberty and freedom which is more in danger now than ever before.”

Then she talked about the real meaning of the bells for her.

“Our freedom to worship as we choose, and the house we choose to worship in, along with all things considered holy to our belief systems, now are endangered,” Wall said. “Church bells belong in churches as a reminder to each in his own way as what they have stood for in our past, and will continue to do so for all people through any adversity that faces us in the future.”

She’s right. The bells should be sent home, where they can do what they were intended to do: call people to worship, not call people to war. That memory is a bad one of a war the U.S. should never have been involved in.

Imperial America was not a good look for a democracy. Nor is holding on to bells a souvenirs for more than 100 years.