WEST POINT, New York — A church bell that once belonged to a Catholic parish in Bauang, La Union, rang for the last time outside a Catholic chapel here. The bell is returning home.

After being away for more than a hundred years, the San Pedro Bell – baptized and named after a patron saint – received the blessings of a Catholic chaplain during a valediction ceremony at the Most Holy Trinity Catholic Chapel last Friday, April 29.

“Today is a joyous and happy day for all of us,” said Col. Matthew Pawlikowski, USMA’s Catholic chaplain who officiated the Catholic Mass and led the procession to the site outside the chapel overlooking the Hudson River where the bell rested.

Sending the San Pedro Bell home is “the right and honorable thing to do,” said USMA Chief of Staff Colonel Wayne A. Green in his remarks. “And so we’re here today, in the spirit of friendship and cooperation with our friends from the Philippines, to say farewell to the San Pedro Bell, which has been part of the West Point community for many years, and return it to its rightful place.”

Speaking on behalf of Philippine Ambassador Jose L. Cuisia, Jr., New York Consul General Mario L. De Leon, Jr. conveyed the Filipino people’s gratitude and thanks. “Today’s hand-over ceremony carries special significance as we commemorate this year the 70th anniversary of the establishment of diplomatic relations between the United States and the Philippines,” he noted. “And our activity this morning allows us to gaze at our past, while securing our future and giving importance to what strengthens us as a country.” 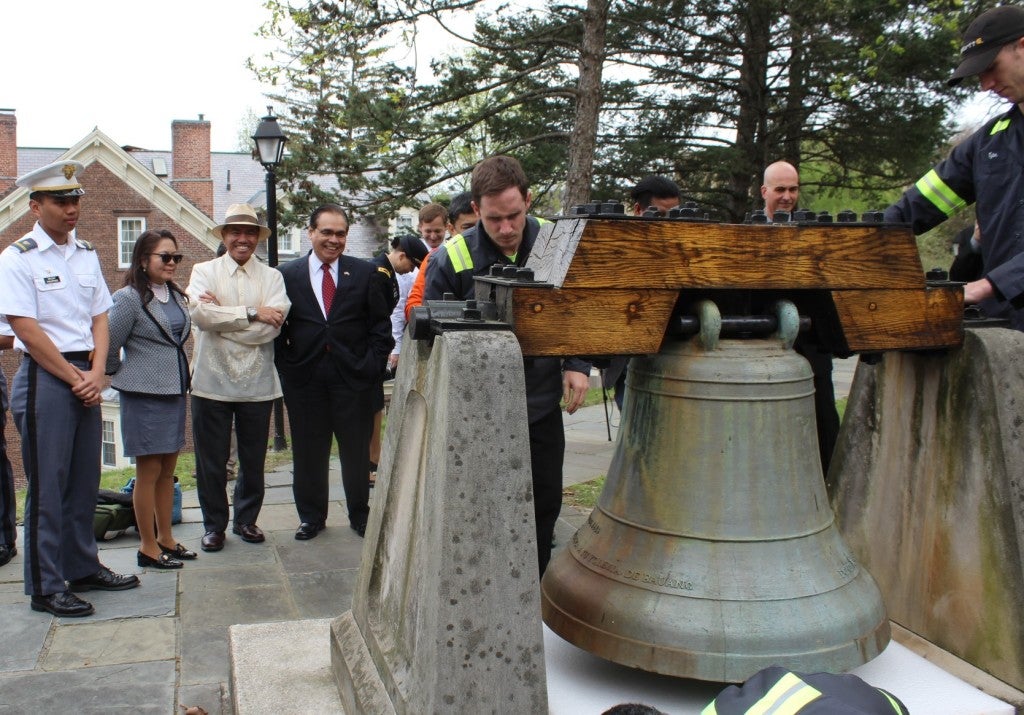 “The San Pedro Bell could be called the Balikbayan Bell,” said Consul General (Ret.) Sonny Busa, injecting a bit of humor in an otherwise solemn occasion. “It’s going home in a balikbayan box, but not in one filled with shoes and M&M’s.”

Busa, who represented the Filipino American community, the US-Philippine Society and the West Point Society of the Philippines at the hand-over, pointed out that “the bell would have seen many momentous historical events in the history of America. Two World Wars, the Korean War, the Vietnam War, the Cold War, Desert Storm, Iraq and Afghanistan. The bell has seen thousands of America’s finest young men and women pass by. It has rung for their weddings. It has tolled for their funerals. It has rung for their homecomings. It has tolled for their departures.”

A West Point graduate himself, Busa recalled that the bell “rang for my wedding here 39 years ago at this very spot. It will bring back memories and most importantly the thanks of the American people, especially the many West Pointers who have passed by it on their way to their rendezvous with destiny. It is said that the history of West Point is the history of America. The San Pedro Bell was part of it.”

A choral rendition of “Bayan Ko” (My Country), led by a dozen members of the Washington, D.C.-based Philippine American Foundation for Charities (PAFC), followed Busa’s remarks. Filipino cadets and several guests joined in the singing.

As the final strains of the patriotic song echoed across the Hudson River, many in attendance were visibly moved. “This is a very proud and privileged moment for me, something I will never forget,” said Filipino cadet Don Stanley Dalisay of Tigloy, Batangas. “It’s a great honor to have been involved in some way to get it back.”

An economics and operations research junior, Dalisay played a role in a team effort to establish the bell’s history by taking pictures and sending them to two University of Santo Tomas (UST) professors who were enlisted last year to research the subject.

History in the making

After the mass, the highlight of Friday’s ceremony was the ringing of the bell. The chaplain did the honors first, followed by mostly everyone who gathered around the bell. They took turns while pictures were snapped to record history in the making.

As participants retired to the church hall for a reception, the massive bell – which is made of silver and copper and weighed 883 pounds – was unbolted from its base, carted off by a half dozen professional movers, loaded on to a flat bed truck, and taken to a warehouse where it will be crated for shipping. In a few days, it will be airlifted to Clark Air Force Base in the Philippines, then transferred to its original home – the Church of Saint Peter and Paul in Bauang where a big celebration awaits.

It was from that parish where the bell was taken and brought to the United States as a military souvenir.

As recalled by Col. Green, the San Pedro Bell was almost destroyed at the outbreak of the Philippine-American War in 1899, when bells were being melted down and made into guns. But the advance of American forces in La Union saved the bell.

“A West Point graduate, Thomas Barry, from the Class of 1877, was one of the American Army officers serving in the Philippines during the war,” he explained. “Years later, he became USMA’s 21st Superintendent, and during his time here, was instrumental in having the bell transferred to West Point, sometime in 1915.

“But after its arrival, the bell remained in the belfry of the Catholic Chapel for years, unhung, unrung, sitting in silence. It was discovered in 1959, during the chapel expansion, and for the past several years, it has rested outside the Chapel – proudly sitting in a place of honor, but yet, still silent.”

Apparently, no one at West Point knew about the bell’s history until USMA’s current Superintendent, Lt. Gen. Robert L. Caslen, Jr., received a letter on November 10, 2015 from Fr. Ronald Chan, the parish priest of the Bauang Catholic Church, one of the oldest in the Philippines. Based on the UST professors’ research, the letter basically requested USMA to return the bell.

After verifying that the markings on the bell matched the descriptions provided by Fr. Chan, the Superintendent responded two months later: “While we have been honored to guard and display this bell for the past several decades, we would be glad to return the bell to its rightful home.”

From that point on, appropriate arrangements were made for the transfer, culminating in last Friday’s valediction ceremony.

Busa was informed of the bell’s return last month when he was invited by Superintendent Caslen to address the Corp of Cadets. Busa subsequently took part in coordinating the send-off ceremony, including the participation of the Filipino American community and Philippine Embassy officials.

The successful effort to return the San Pedro bell has revived interest in the famous bells of Balangiga, which were taken as war booty in 1901 by the U.S. 9th Cavalry from the church in the Eastern Samar town.

The bells signaled a surprise attack by Filipino rebels who killed more than 40 U.S. soldiers stationed there. The U.S. Army responded with a bloody reprisal by burning down the whole town, killing more than 250 men and children. Two of the bells are now at F. E. Warren Air Force Base in Cheyenne, Wyoming, and a third is at Camp Red Cloud in South Korea.

But repatriating these bells back to the Philippines has not been easy. “The issue is complicated because it has become more than a battle over the bells themselves, but the focal point of historical and ideological resentment,” says Sharon Delmendo, a Filipino American professor at St. John Fisher College in Rochester, New York, who also attended the ceremony.

“I would like very much for these bells to be treated like the San Pedro bell, as a church bell that summons the faithful to mass, one that is integral to the life of the community. This would be a peaceful way to bring a very tumultuous history to rest.”

In a book she wrote in 2004, “The Star-Entangled Banner: One Hundred Years of America in the Philippines,” Delmendo focused solely on the issue of the Balangiga bells in the concluding chapter.

“For each country, what is at stake is not simply the bells as a symbol of war booty,” she wrote. “What is at stake even today, is history itself: who was the putative villain or victim in the Balangiga incident and, ultimately, in the Philippine-American War.”

Delmendo is nevertheless hopeful for a favorable resolution. “If the American and Japanese veterans of the Battle of Iwo Jima and the attack on Pearl Harbor can shake hands, embrace and forgive each other and offer peace, then I see no logical reason why there can be no reconciliation over an incident that happened over a hundred years ago. If anyone has the right to feel resentful, it’s those real-life survivors who lost friends and comrades. If they could do it, we should be able to do it too.”

Voice of the Church

But, as Delmendo aptly puts it, both sides in the debate will need to stop politicizing the issue and reframe it as returning the bells to their original mission of calling people to prayer and worship, to a sacred place and not in a military base.

Quoting the poet Henry Wadsworth Longfellow, who once wrote that “bells are the voice of the church,” Col. Green noted that “for the past 100 or so years, one community has been without its voice, and today, we have the opportunity to return its voice back to that community.” 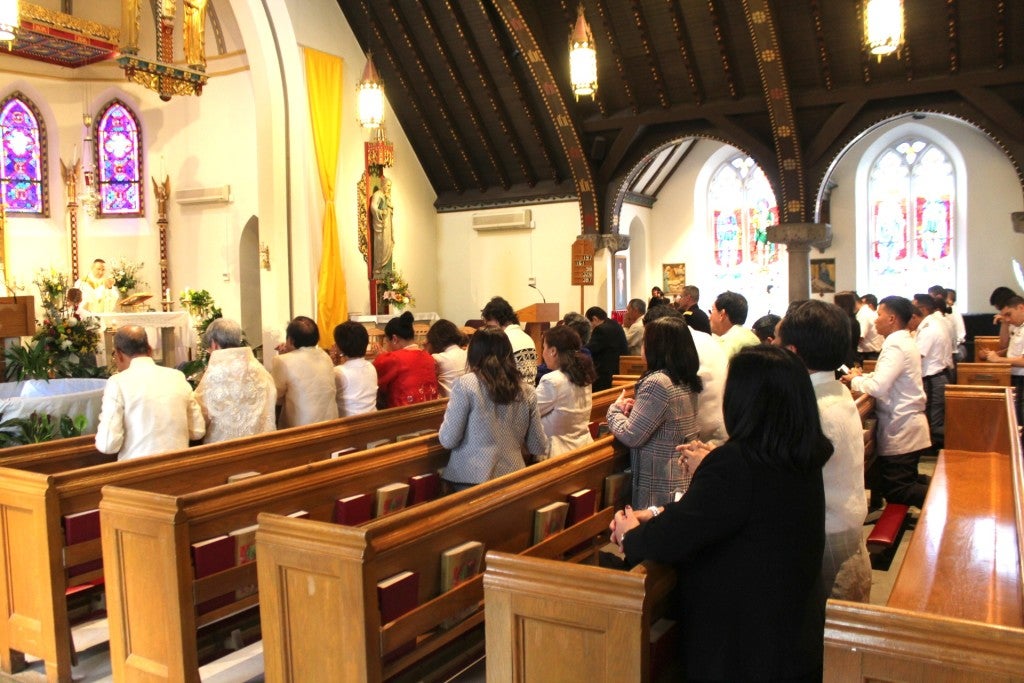 Members of the Filipino American community and cadets from the U.S. Military Academy pray together during a Catholic Mass celebrating the San Pedro Bell. JON MELEGRITO 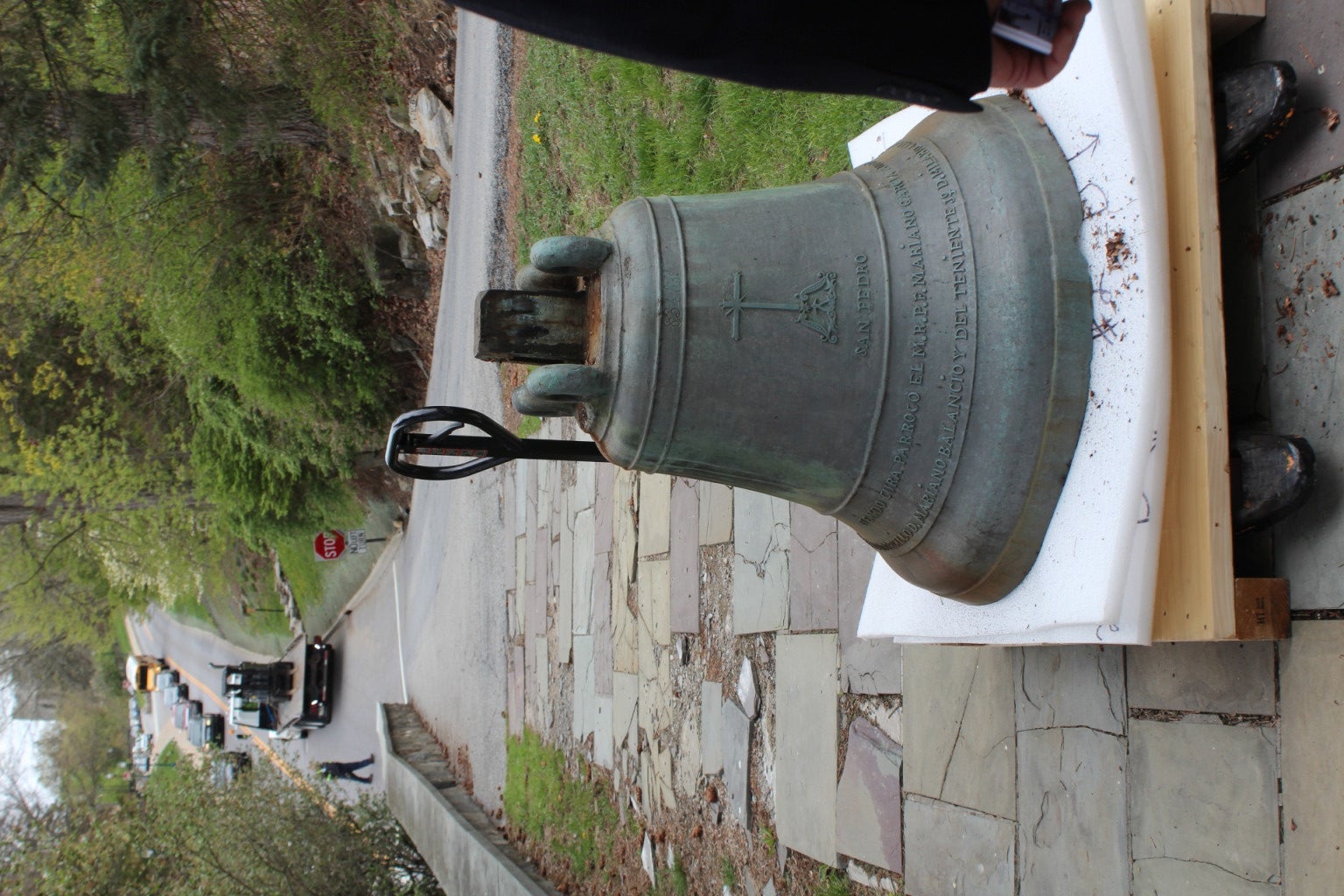 A flatbed truck waits for the San Pedro bell to be loaded as it begins its journey home. JON MELEGRITO 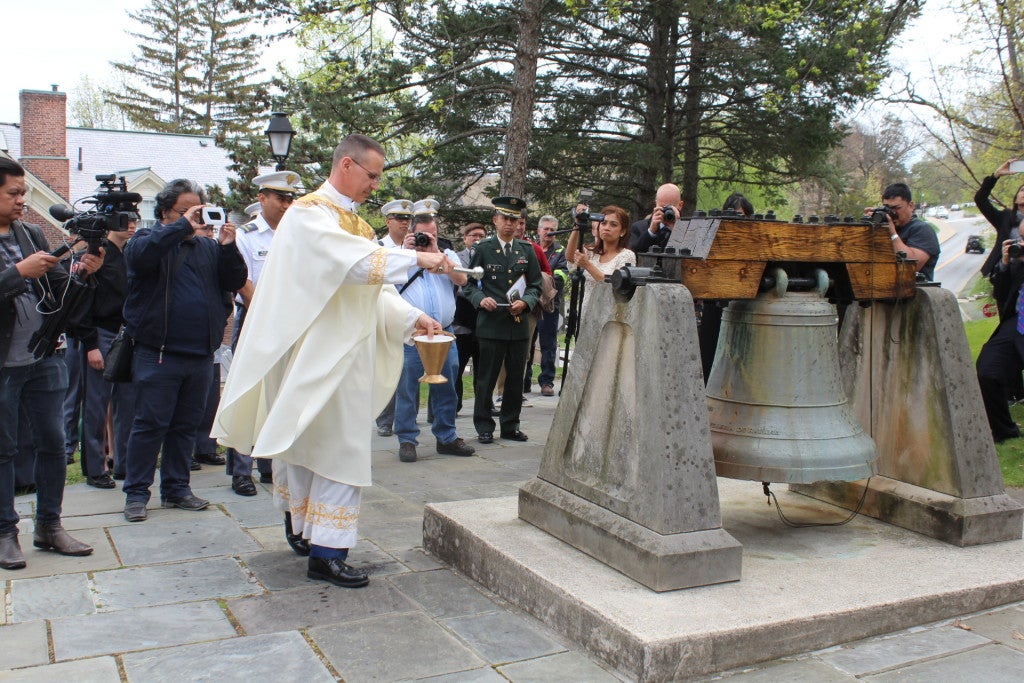 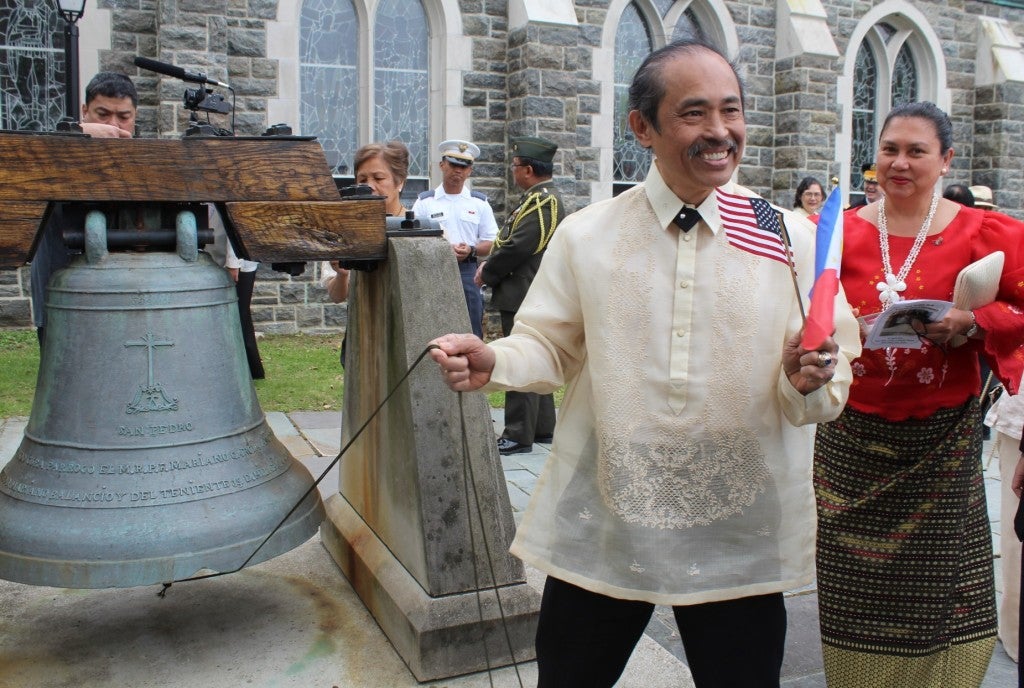 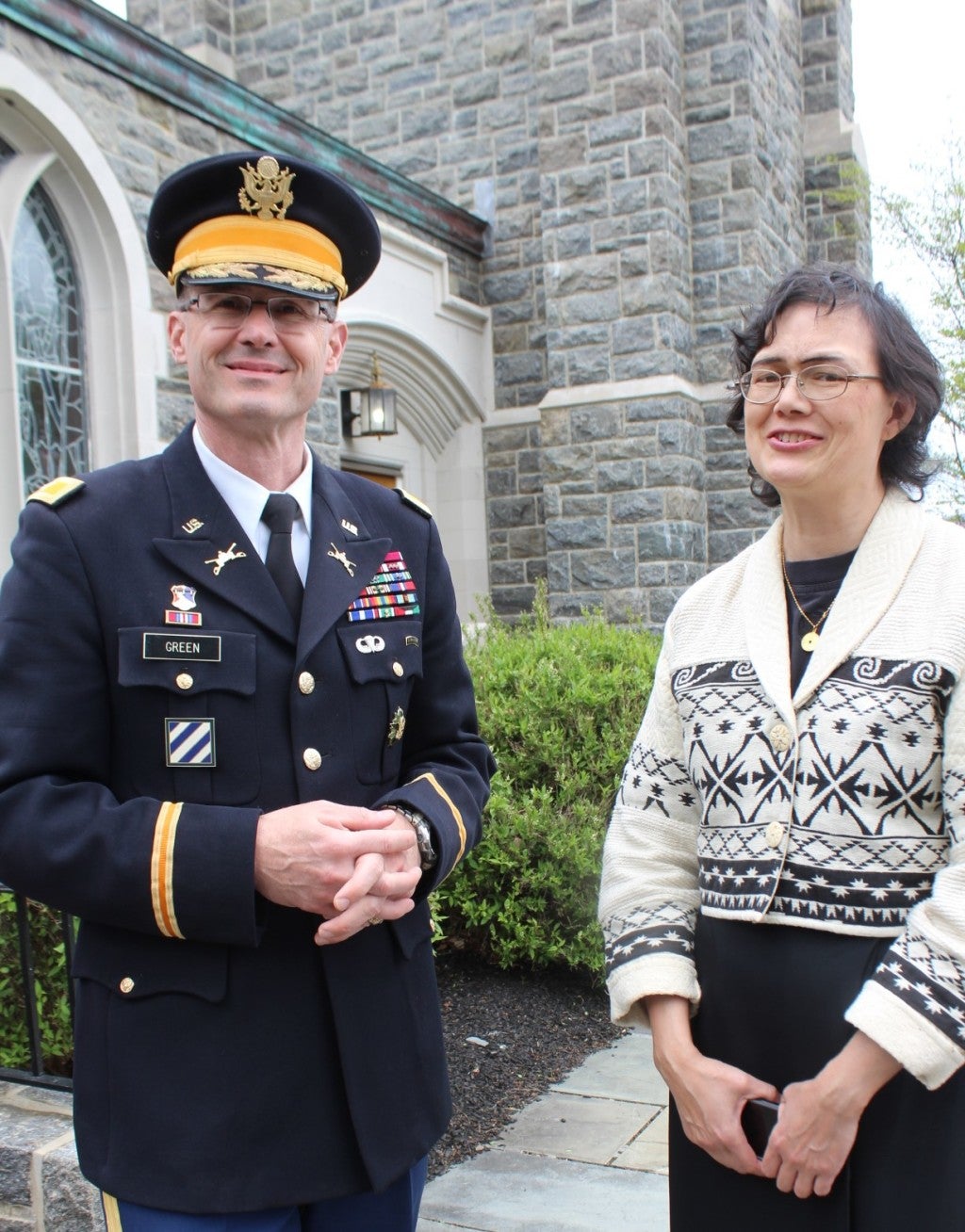 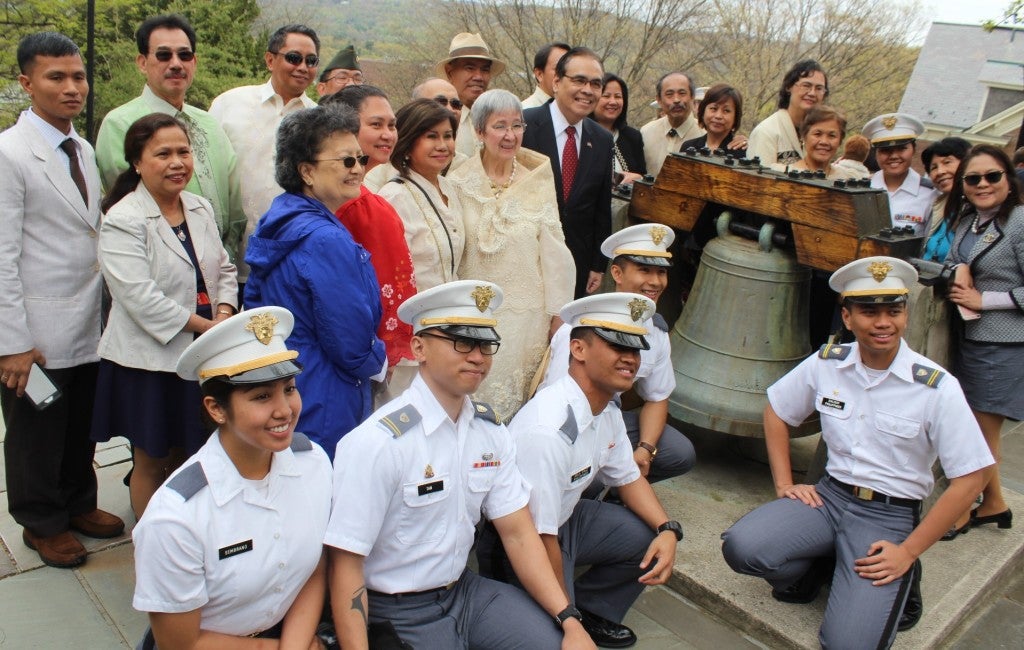 Filipino West Point cadets and members of the Filipino American community
pose for a group photo around the San Pedro Bell. JON MELEGRITO