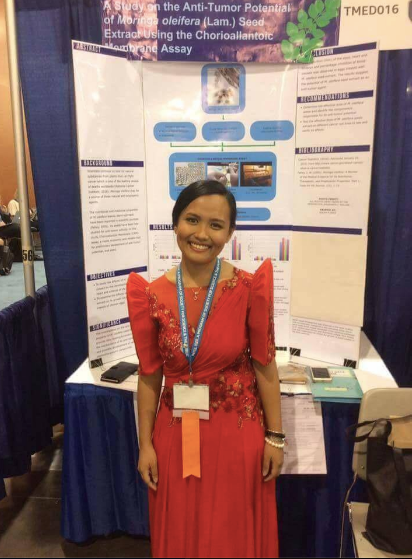 A Filipino student has reaped the benefits of her hard work.  Arianwen Rollan of Cebu City was credited by the Qatar Foundation during the 2016 Intel International Science and Engineering Fair (IISEF) for her research on  the anti-tumor properties of malunggay seeds (Moringa oleifera).

Rollan, who represented the Cebu City National High School, was among the eight Filipino students who took part in the event, as per reports from the Filipino Times.

The event was made possible by the Society for Science & the Public, the report said. It is the world’s largest science research competition for high school students.

“Intel sees the potential in aspiring young people who have an unquenchable curiosity in things around them”, the Intel executive was quoted saying in the report. “ We are proud that this curiosity resulted in Arianwen’s research being recognized in this year’s ISEF among other projects from young innovators around the world.”

The report also estimated that over 1,700 youngsters from 419 affiliate fairs in 77 countries, regions, and territories—all participated in the science showcase.

Aside from the winners, 600 finalists also received awards and prizes for their innovative ideas, including 22 “Best of Category” winners, who each received a $5,000 (PHP 234,197) prize, according to the report.

Each of the victors’ schools and affiliations also garnered a $1,000 grant from Intel Foundation for their efforts of honing the students.

“We and Intel are optimistic that these aspiring scientists and engineers will be able to continue to pursue their passions, and we are dedicated to foster their creativity, curiosity, and ingenuity to contribute to the future.” Khristian Ibarrola/rga

Filipino student among the winners of NASA’s design challenge