Filipino student among the winners of NASA’s design challenge 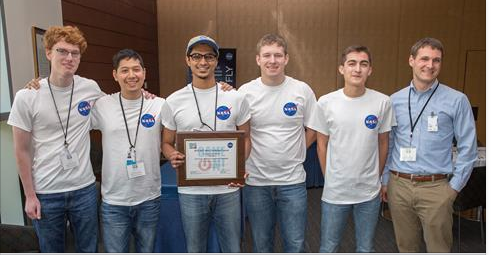 Jose Mari Tuason (pictured holding the certificate of recognition) poses for a photo together with his professor and teammates from the University of Illinois.

Another talented Filipino has made waves internationally, as college student Jose Mari Tuason was among the awardees of the first Breakthrough, Innovative and Game-changing (BIG) Idea Challenge hosted by the National Aeronautics and Space Administration (NASA) earlier this week.

Tuason, together with his teammates from University of Illinois at Urbana-Champaign, bested other competitors from top US colleges including Georgia Tech, The State University of New York at Buffalo and Purdue University, inside NASA’s Langley Research Center.

Tuason and his crew clinched victory after convincing a panel of space exploration experts with their flawless version on how to improve HIAD’s lifting capabilities on space stations.

Led by their professor Zachery Putnam, the bright students left the judges in awe by demonstrating a combination of moveable mass and cable system, which morphed the HIAD shape and provided it with direct lift control.

Among those impressed by the groups’ feat was Acting Director of Game Changing Development (GCD) Program, Mary Wusk.

“Now is the time when revolutions in technology and engineering will be the markers of tomorrow’s success in space exploration,” said the GCD chief at NASA Langley. “We recognize the value in engaging top talent from America’s brightest collegiate students and faculty, and are making university collaboration a priority to remain at the forefront of these revolutions”.

Meanwhile, Tuason and his teammates were also granted with a GDC internship program this summer and will reportedly work on further improving their concept. Khristian Ibarrola, INQUIRER.net