Fil-Ams ‘feel the Bern’ at Sanders rally in Southern Calif. 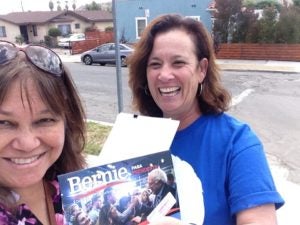 The crowd at “A Future to Believe in Southern California Election Night Rally” overflowed the stadium’s 8,000-seat capacity.

“I think we have a real shot to win primaries in a number of states coming up,” Sanders said at the rally. “And don’t tell Secretary (Hillary) Clinton — she might get nervous — but I think we’re going to win here in California.”

The enthusiastic crowd represented the wide range of Californians who will be voting in the June 7 primary; it was a very diverse mix of ethnicities, ages and genders. Among them were Filipino Americans who make up a large population in Carson and the Los Angeles South Bay area.

Many of the Filipinos present were also supporting local progressive Democratic candidate Warren Furutani for State Assembly District 35, representing Carson and much of the Los Angeles South Bay.

SoCal Gas company engineer Daniel Ojeda Kimbrough had this to say: “It’s a packed house! Standing room only! I’ve never been so happy to have waited in such a long line. Seeing all these people here gives me hope!” 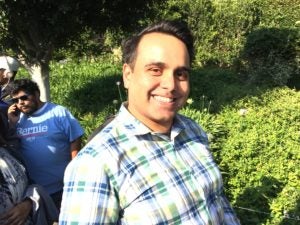 Kimbrough added, “The Bernie Sanders rally was a fantastic event. It was great to see so many people supporting the basic idea that the government should look out and care for its people.”

Rose Estepa Ibanez, long time community advocate and Carson resident, admired Sanders’ outspoken message of “making major changes.” She also was hopeful that a new third political party would arise from his candidacy, citing other countries functioning beyond a two-party political system, such as Brazil and Finland. “We are behind the times and we need a change now,” she commented. 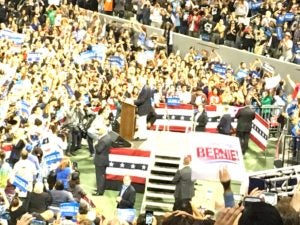 Some 11,000 supporters turned out for Bernie Sanders’ rally in Carson, California. FLORANTE IBANEZ

“I went to the Bernie rally because he embraces the same concerns that I do.  I’ve been a nurse for over 30 years, and I don’t want anyone to die because they couldn’t afford healthcare, couldn’t afford medications or didn’t have access to mental health services,” stated Fil-Am Vicky Perez Geaga who drove with friends the 20 miles from Echo Park in Los Angeles to attend the event.

“We need universal health care now, and he is the only candidate supporting it. Bernie, like Pope Francis, is striving for a moral economy, one that takes care of people first, not financial institutions or corporations,” Geaga added. “Just look around–massive homelessness, so many people living without savings, one paycheck away from catastrophe, massive student debts.  We need a change and we have that chance with Bernie.”