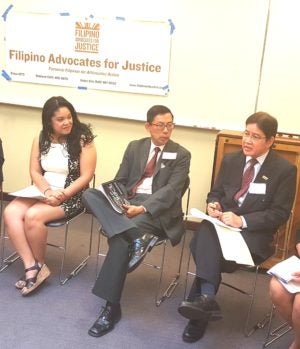 OAKLAND, California – Filipino community activists expressed hope that more Filipino Americans will turnout in the coming June 7 California presidential primary, as a carryover of the election fever that saw an 81 percent turnout at the May 9 national elections in the Philippines.

This hope was aired at the Rock the Balut: Mobilizing the New Majority press briefing during the recent celebration of the 43rd anniversary of Filipino Advocates for Justice (FAJ). Rock the Balut seeks “to energize the Filipino vote in California.”

“Filipinos are quickly becoming an active constituent in the democratic process with the potential for more growth,” reported FAJ Board President Nelson Layag.

“In California, not only are there more than 370,000 Filipino registered voters, but Filipinos are also the largest immigrant group after Latinos. In 2013 40 percent of Filipino legal permanent residents were eligible to apply for naturalization, a precursor to voter registration,” Layag added. 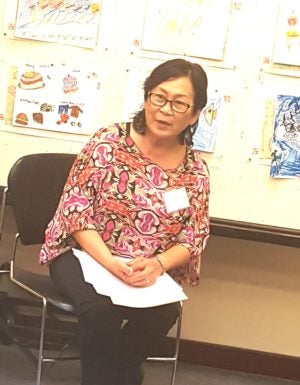 Part of the FAJ’s efforts to inform the Filipino community is to use a study being funded by Wells Fargo Bank on areas where Filipino voters could have significant impact.

“Studies on voting behavior found that when folks do have dual citizenships and are actively voting in their home country, they are actually active voters wherever they are living as well,” reported Apostol, explaining why Fil-Ams’ enthusiasm over the recent elections in the Philippines could carry over to the polls in the US.

“Voting behavior actually feeds off each other and it is encouraging,” Apostol said. She urged Filipinos to show the same enthusiastic participation in electoral participation here.

It is still a major challenge, however. As the 2010 Census indicated, more than half of the 1.4 million eligible Filipino American voters in 11 Northern California counties were unregistered.

Ricardo Reynoso of the Alameda County Registrar of Voters further broke down the figures on Filipinos in his county: “In the 2010 Census figures, about 6 percent or roughly 82,000 of the1.5 million residents of Alameda County were Filipinos. Eighty percent of this or around 65,000 were of voting age, but only close to 30,000 were registered voters. That leaves around 35,000 who were qualified but unregistered potential Filipino voters.”

“If we are going to make a margin of difference considering that we are the largest ethnic group in the state, we need to register to vote,” Sy exhorted.

He said further: “Also, we learned that in some of the Assembly races, state Senate races and counties supervisorial seats, Filipino Americans make up a sizable difference to actually make an impact in the elections, if only they are register and participate.”

Some of reasons cited for the low rate of Filipino voter registration: the community is not inspired to vote; there is a sense of apathy; Fil-Ams feel their votes won’t matter; political campaigns don’t bother to call or involve Filipinos if they are not a sizable constituency; there is little investment poured in mobilizing the Filipino vote.

“When they are inspired, like the election of President Barack Obama, the community comes out to vote in large numbers,” stressed Galedo.

Sadly, more than 50 percent of qualified and registered Filipino voters do not vote, reported Reynoso. Among the cities in Alameda County are Oakland, Alameda, San Leandro, San Lorenzo, Hayward, Union City and Fremont.

Reynoso stated that Filipinos have to be motivated in order to be prompted to register and actually vote. Apostol and Sy agreed.

“A lot of studies indicate that voters are motivated and come to the polls when they find out what kind of impact they can make in the elections. So that is the main driving force for this to make Filipinos go out and participate.”