As US elections near, more immigrants apply for citizenship 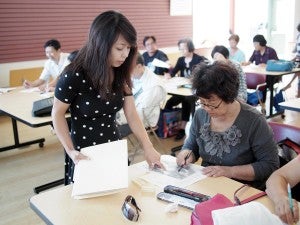 HOUSTON, Texas — For more than a decade, Jannette Diep has been helping immigrants apply for US citizenship, and as the presidential election looms, Diep, the executive director of Boat People SOS, says she has seen a rising interest among immigrants in becoming US citizens.

More immigrants are going to community centers like hers to find out how to become naturalized, she said.

The number of people applying for US citizenship shows an uptick during presidential election years, according to the US Citizenship and Immigration Services (USCIS).

“They come to our office or call us,” says Diep. “They’re very eager to get their citizenship.”

The good news, she said, is that applying for citizenship is easier than people think.

The organizations host free workshops where legal permanent residents can get help with their applications. They help eligible immigrants access fee and language waivers. They also offer English language and civics classes.

Mariana Sanchez, chief operating officer of Bonding Against Adversity, said that between January and April, her organization alone has helped more than 1,000 immigrants file their citizenship applications. “We’re hoping that more and more will apply,” she said.

There are about 8.8 million immigrants in the United States eligible for naturalization, and about 350,000 live in the Houston area, according to Benito Juarez, manager for immigrant and refugee issues at the Houston Mayor’s Office of International Communities and Refugee Affairs.

“If they’d be able to vote, then they’d become part of the life of the city,” Juarez said at an ethnic media briefing in Houston. “They’d become more active [in civic engagement].” 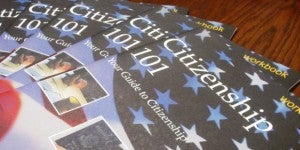 The naturalization process, from the time an applicant sends in the application to an interview with an immigration officer and taking part in the actual swearing-in ceremony, can take five to six months. That means that many immigrants are applying to become US citizens now, in the hope that they will be able to register to vote in time for November.

Some newly naturalized citizens say being able to exercise their right to vote is the main factor that prompted them to apply for citizenship.

“Now that I can vote, this gives me a sense of ownership to be part of this country,” said Ming Shen, an immigrant from Taiwan who became a US citizen earlier this year. “I’m very glad that my voice can be heard in this country.”

But the benefits of becoming a US citizen extend far beyond November. U.S. citizens can petition family members, travel freely outside the United States, have immunity from deportation, and get a job with the federal government.

Tien Nguyen, a recently naturalized US citizen from Vietnam, said that becoming a US citizen allows him to travel without worrying whether he will be let back into the country.

“I can now travel freely as an American,” said Nguyen.

Research has shown that becoming a US citizen is also associated with an increase in income.

Since he became a US citizen this year, Mateo Amador Perez says he got a better-paying job and the quality of life of his family has improved.

“I decided to naturalize because I knew it will bring more opportunities for me and my family,” said Amador Perez, who is originally from Mexico. “I wanted them to have the best future that I could give.”

Texas State Representative Gene Wu, who spoke at the press briefing, echoed the sentiments of the newly naturalized citizens. Forty percent of the people in his district are foreign-born, he said.

“My family, myself—we are all immigrants ourselves,” Wu said. “Being an American citizen is something that I have been very proud of.”

For more information about the New Americans Campaign and upcoming citizenship workshops, go to www.newamericanscampaign.org.