US, China, Europe look forward to working with Duterte 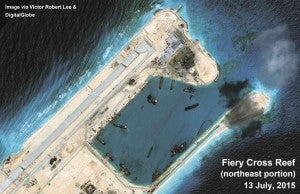 DISPUTED REEF. Photo from the air shows construction activities undertaken by China on Kagitingan Reef (Fiery Cross Reef), including an airstrip, in a disputed area in the South China Sea. The Philippines and China are among several countries disputing ownership of the reefs located on the Spratly Islands. PHOTO BY VICTOR ROBERT LEE AND DIGITALGLOBE

US State Department spokesperson Elizabeth Trudeau said “Washington respects the choice of the Philippines people. We gladly work with the leader they’ve selected.”

Earlier, US ambassador Philip Goldberg criticized Duterte’s comment that was offensive to women, particularly on the rape and murder of Australian missionary Jacqueline Hamill in 1989.

Asked about the US’ concerns about Duterte, Trudeau said, “We respect the choice of the Philippines.”

“We look forward to congratulating, welcoming, and working with him,” said Trudeau.

The US also reiterated support for the Philippines’ eff0rt to address maritime disputes in the South China Sea “without the use of force, intimidation, or coercion.”

Meanwhile, China has urged Duterte to agree to bilateral negotiations in addressing territorial disputes in the South China Sea and exclude non-parties, such as the US and Australia, from the issue.

Chinese foreign ministry spokesperson Lu Kang was responding to  plans of Duterte to convene a multilateral meeting of Asean claimants and China along with the US, Australia. 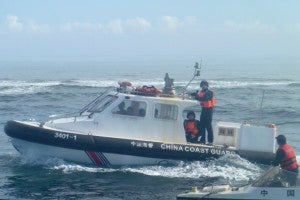 He said “China has been following the election in the Philippines.”

“We hope that the new government of the Philippines can work with us towards the same direction, properly deal with relevant disputes, and bring bilateral relations back to the track of sound development with concrete actions,” said Lu in a press briefing in Beijing, a copy of the transcript of which was posted in the Chinese Foreign Ministry website.

Lu said, “One of the two tracks states that disputes over the sovereignty of relevant islands and reefs in the South China Sea shall be properly resolved by countries directly concerned through bilateral negotiation based on historical facts and international law.”

EU ambassador to the Philippines Franz Jessen  said the EU and the member states’ representatives in Manila welcomed the orderly elections on May 9.

“I was encouraged by the high number of people who chose to exercise their democratic rights,” said Ambassador Jessen in a statement on Wednesday.

He said the EU has since been awaiting the official announcement of Duterte’s election and “looks forward to taking the EU-Philippines agenda forward with him and his new administration.”

“I congratulate the Filipinos on their exercise of democracy. It reminds the world that PH is such an open & healthy democratic system,” Goldberg tweeted.  “Looking forward to congratulating the next leaders of the Philippines once the official election results are in.”

The Chinese official said bilateral negotiation in resolving disputes would be in line with the Declaration of Conduct of Parties in the South China Sea (DOC) signed by Asean and China in 2002.

The Philippines under the Aquino administration has refused to address territorial disputes with China through bilateral ties. The Department of Foreign Affairs (DFA) earlier maintained that it would only agree to multilateral negotiations with claimant Asean countries — Vietnam, Brunei, Malaysia and China.

Manila has filed a petition with the Permanent Court of Arbitration (PCA) to nullify China’s massive territorial claims in the waters of South China Sea under the nine dash line. The decision is expected to be released in the coming weeks.

“I want to stress that the Philippines is China’s close neighbor and the two peoples enjoy traditional friendship. China always attaches importance to developing ties with the Philippines and has been working hard to preserve bilateral relations with a larger picture in mind,” he said

“We hope that the future for relations between China and the Philippines can be brighter,” said Lu.  SFM/rga