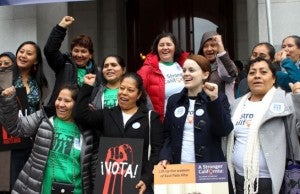 LOS ANGELES — Amid a rising demand for domestic work and an unprecedented elder boom, a new report from the University of California in Los Angeles Labor Center has found that an estimated 2 million households in California hire domestic workers for childcare, house cleaning and home care services.

The report, “Profile, Practices and Needs of California’s Domestic Work Employers,” was based on 501 randomly dialed phone surveys throughout the state and is the first comprehensive study of domestic work employers.

It illustrates the dependence of Californians on domestic work and that the industry still lacks standards normally implemented in other workplaces because the work is happening inside the home.

“In our survey, we found that 49 percent of employers didn’t research or look up information when they devised the terms of employments like pay, hours and benefits,” said Saba Waheed, research director at the UCLA Labor Center and co-author of the report.

“The lack of clear standards leads to wide variations in work and pay arrangements. Furthermore, according to our study, employers value domestic work and need more support,” Waheed added.

Among key findings in the study include: 54 percent of Californians hire domestic workers for housecleaning support; 27 percent hire for homecare support; and 19 percent hire them for childcare support.

It also found that the profiles of employers cut across racial ethnicity, class, gender and occupational lines. Specifically, while more than 50 percent of employers identify as white, 43 percent are Latino, African American, Asian American and other races.

“Everyone from the CEO of the company to the person serving the food hires domestic workers,” Waheed said Wednesday, May 4, during a presentation of the report at the UCLA Labor Center in Los Angeles.

“We want to be fair employers, but we often don’t know where to start or how to do that,” said Lindsay Imai Hong, who is involved with Hand in Hand, a national network of employers of nannies and other domestic workers.

“The lack of clear industry standards leaves domestic employers really on their own to figure out terms of employment. And as the study demonstrates, half of employers in the state devise the terms on their own,” Hong added.

Even with the cost associated with domestic work, the report found that employers value domestic work and require additional support. One-third of employers, mostly those in homecare and childcare, said they would pay better wages.

“Without a doubt, my children are growing into generous, joyful, caring little people because of the childcare worker we employ,”  Alex Desautels, a mother of two from Oakland, California, said in a statement.

“Paying for childcare hasn’t always been easy for our family, but what the childcare provider has brought to my children is priceless. We have to do better by the women who are caring for our families,” Desautels said further.

“The data demonstrates there is a need for more public investment and policy advancements related to homecare and childcare,” Waheed said.

“Without it, the burden of the cost of care will fall on families and individuals who struggle to pay, or else on workers who will work with reduced wages, reduced hours, or uncompensated time…Our state can lead the way in how we value and support the work.”

To address the lack of industry standards and  the growing need for domestic work, the report suggests

During Wednesday’s presentation, employer Robert Schnair, 88, expressed support for the proper treatment of domestic workers. His Filipina employee Teresita Villaseñor, 56, formerly worked at a home in Hawaii where she took on 24-hour shifts and ate dog food.

Villaseñor has worked for Schnair for about 18 months and works four 12-hour shifts per week with overtime pay and three days off. During a trip to New York, Villaseñor was also provided allowance.

“They have a life to live and they have obligations,” he said.

As domestic work advocates work toward establishing an infrastructure for the industry, among measures being pushed for includes Senate Bill 1015, which would permanently establish overtime pay for domestic workers.

Aquilina Soriano Versoza, executive director of Pilipino Workers Center, a non-profit organization serving Filipino workers, said there also needs to be more training in providing proper care for patients, such as those with dementia and Alzheimer’s.

But even with the problems associated with fixing the current system for domestic work, Versoza said the elder boom should be viewed as a blessing rather than a crisis.

“Living longer means that we have more time to get to spend together, to learn new [skills], to love each other,” she said.

“The question is how we want to live and age…Now is the time to ensure government policies and long-term care system actually reflect and support the realities of 21st century families so that families have the care that they need and then they can go and still participate in the community, in the economy and live full lives,” Versoza said.