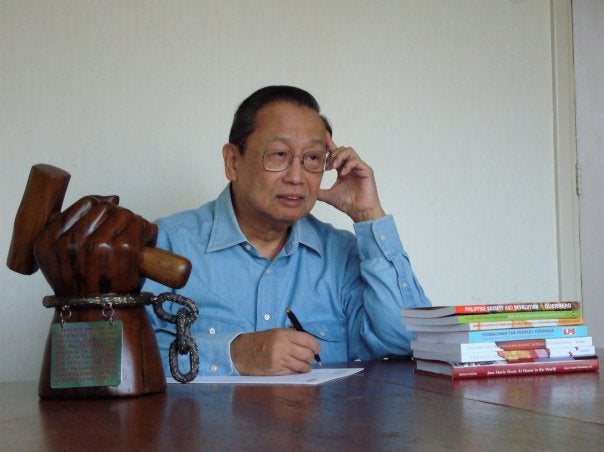 LUCENA CITY, Quezon — Barely an hour after polling precincts closed on Monday, exiled Communist Party of the Philippines founder Jose Maria Sison addressed Davao City Mayor Rodrigo Duterte as the next president of the Philippines and invited him to talk peace.

“I now look forward to further conversations with President Duterte to arrange an immediate ceasefire, release of all the political prisoners, my return home and acceleration of the peace negotiations. Let us have as goal a government of national unity, peace and development,” Sison, who has been based in The Netherlands for many years now, said in an online interview on Mondaynight.

“I hope the trend in favor of Duterte can no longer be reversed by cheating. So, I convey to him my warmest congratulations,” Sison said.

As of 7 p.m. on Monday, Duterte was leading the race among five candidates for president as the Commission on Elections started releasing initial election results.

Sison said Duterte’s possible victory should be credited to the way the tough-talking Davao mayor handled his campaign.

“[Duterte] adopted the winning campaign line against the Aquino [administration], corruption and criminality, and for his common tao (common man), street level campaign style,” Sison said.
He said Duterte did not need his endorsement or the endorsement of the CPP, the New People’s Army (NPA) and the National Democratic Front of the Philippines (NDFP) to win the presidency because the rebel forces “opposed election as tool of the ruling system.”

“But the revolutionary forces and I have always welcomed and applauded Duterte’s offer to have a just and lasting peace by addressing the roots of the armed conflict,” Sison said.

Duterte had vowed that once elected president, he would order an immediate ceasefire with communist rebels to pave the way for the resumption of peace talks.  SFM