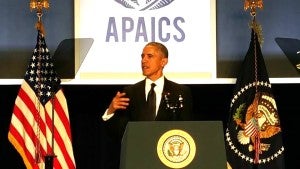 WASHINGTON, DC — President Barack Obama singled out 19-year-old Filipino American student Regine Ledesma from a crowd of more than 1,500 dinner guests, calling attention to her story as “an example of what is at stake” in the national debate over comprehensive immigration reform.

In his keynote address Wednesday night, May 4, at the 22nd Annual Gala Dinner of the Asian Pacific American Institute for Congressional Studies (APAICS), Obama said it was Ledesma’s story, and countless others like hers, that prompted him to do something “to make our immigration system more just and fair.”

“We need congressional action,” Obama declared, but because he couldn’t wait any longer, his administration established the Deferred Action on Childhood Arrivals (DACA) in 2012 to grant immigration relief to undocumented young people like Ledesma.

“I want to tell Regina’s story,” Obama began. “She came to the United States from the Philippines when she was five years old, but when her father, an engineer, fell ill he had to give up his job, which meant he could no longer secure documentation for his family. So, Regina’s mom supported the family by working in a hair salon.” 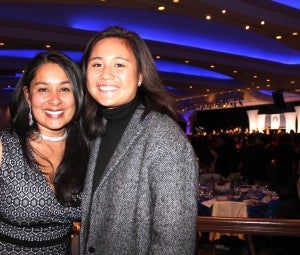 Regine Ledesma (right) and Reva Gupta of the White House Initiative on AAPIs, smile for the cameras after listening to President Obama’s keynote address. JON MELEGRITO

Obama noted that “Regina grew up as American as anybody else. She didn’t know until she was in middle school that she was undocumented and she didn’t understand until then that she’d be perpetually in danger of being deported from the only country she had ever called home. As a junior in high school, Regina requested relief under the DACA policy we put in place. And today she’s a sophomore studying economics at the University of Maryland. Her future is bright and America is better off because she is here. That’s the story of immigrants in this country.”

But the President cautioned that his executive actions could not replace comprehensive immigration reform (CIR). He urged the AAPI community, which is the fastest growing in the country today, to use its power in pushing Congress to pass CIR.

After the president’s speech, which touched on other issues like health care and education disparities, Ledesma said she’s “even more motivated now” as a community organizer, student activist and advocate for social justice. Friends and colleagues later gathered around her, shaking hands and hugging each other. 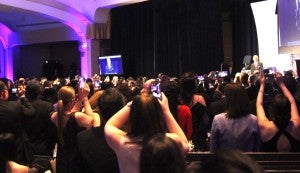 More than 1,500 AAPIs at the APAICS Gala Awards Dinner give President Obama a thunderous ovation after his keynote speech. JON MELEGRITO

Last year, Ledesma signed on as campaign fellow with the National Korean American Service & Education Consortium (NAKASEK), a civil rights organization that does advocacy work on immigration. She joined other activists in rallying in front of the Supreme Court last month when the top justices heard oral arguments on the legality of Obama’s executive action on immigration.

“Among many undocumented Filipinos, shame and stigma keep them from enrolling in DACA,” Ledesma says. “By sharing my story, I want them to feel comfortable in coming out. It is empowering. More stories should be shared so we can change the narrative of shame and fear.” 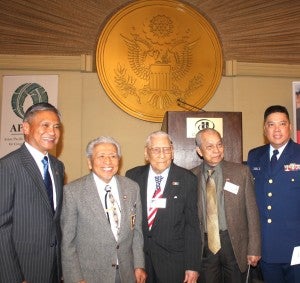 Wednesday’s dinner event at the Washington Hilton was part of nationwide events to kick off Asian American Pacific Islander (AAPI) History Month. AAPIs from all over the country, celebrities and community leaders, diplomats and elected officials attended the largest annual gathering of AAPIs in the nation’s capital.

In his remarks, President Obama also recognized the plight of Filipino World War II veterans. “Just this week we finalized a policy to help reunite [these veterans] with their family members who are stuck in our immigration backlog,” Obama said, referring to another of his executive actions granting parole visas.

The program will fast-track pending visa applications by family members in the Philippines who have been waiting for as long as 20 years to come to the U.S. and care for their aging and ailing parents.

It is estimated that there are about 5,000 Filipino World War II veterans residing in the U.S. whose families are eligible for parole visas. 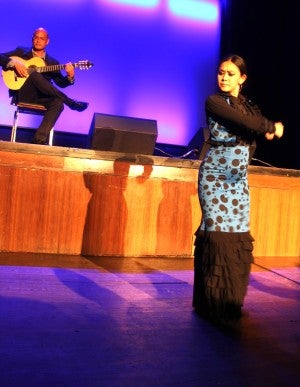 At the White House AAPI Community Leaders Briefing the following day, Felicia Escobar, the President’s Assistant on Immigration Affairs, announced that details on the parole program will be available through the Federal Register after May 6.

“I was pleasantly surprised to hear this announcement,” says Marita Etcubanez, a program director at Asian Americans Advancing Justice (AAJC). “There is an urgency in getting this program under way because these veterans need their families to be with them in their last years.” Etcubanez has been part of a task force working with Congress, the White House and the Department of Homeland Security to establish implementation guidelines.

At another AAPI History Month kick-off event hosted by the Pan-Pacific American Leaders and Mentors (PPALM), Filipino veterans were honored along with other Asian American World War II veterans during a Military Leadership Luncheon.

“We pay tribute to the brave men and women in uniform who paid the ultimate sacrifice,” said Maj. Gen. Antonio Taguba (Ret), PPALM Chairman. “They served our nation with great pride and honor, and for many here with us today who will continue with the long and proud tradition of answering the call to duty – of patriotism and citizenship.”

Earlier in the week, DC Mayor Muriel Bowser kicked off the city’s Annual Asian American & Pacific Islander Heritage Month Celebration with an awards program at the Howard Theater. In her official proclamation read at the event, she recognized AAPIs who have “helped to build and shape our city and nation through civic engagement, entrepreneurship and social impact.” 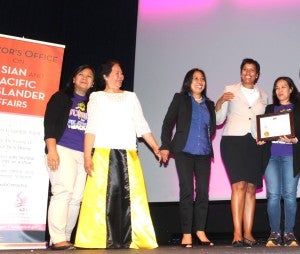 In that spirit, the mayor presented the Community Service Award to GABRIELA DC, the first overseas chapter of the GABRIELA National Women’s Alliance in the Philippines. The women’s rights organization has been at the forefront of national and international economic and political issues, such as gender discrimination, violence against women and women’s health and reproductive rights.

The award commended GABRIELA DC for empowering AAPI women “by creating opportunities for open dialogue amongst Filipino women and the greater AAPI community. A large part of their work includes conducting door-to-door outreach to the Filipino community and providing legal and emotional support to survivors of labor trafficking. They also help human trafficking survivors receive T-Visas and have empowered survivors lead awareness campaigns based on their own experiences.”

Over the years, GABRIELA DC has served victims of human trafficking, notably Filipino teachers who were falsely promised jobs here in the U.S. by unscrupulous recruiters in the Philippines. Activists who lead the organization are all volunteers, many of whom are survivors of human trafficking themselves.

‘Lifeblood of this nation’

Adding to the festive mood of the AAPI History Month kick-off and awards night at the Howard Theater were Flamenco dancer Pam Razon de Ocampo & guitarist Michael Perez. The Filipino American artists wowed the audience with his instrumental artistry and her expressive dance, replete with percussive footwork and intricate hand, arm and body movements.

Perez and de Ocampo, along with GABRIELA activists, advocates like Regine Ledesma and the Filipino World War II veterans are among the AAPIs President Obama had in mind when he said in his closing remarks: “The AAPI community is part of the lifeblood of this nation: you are our teachers, artists, faith leaders, doctors, health care givers, shop keepers, police officers, firefighters, soldiers, sailors, airmen, marines and coast guardsmen defending our freedom every day. Increasingly you are a powerful and visible force in American political life.”