WEST HOLLYWOOD, California – A documentary fiilm is trying to school more people about a deadly disease, hepatitis-B, that is prevalent among Asian Americans, including Filipinos.

Be About It by Christopher Wong screened on May 3 at The London West Hollywood Hotel, followed by a panel discussion with Mimi Chang, MSN, FNP; Dr. Tse-Ling Fong; filmmaker Wong; Alan Wang; hepatitis-B sufferer Shawne Jabonero Lopes and Melissa Jabonero.

Wong described his own lack of awareness of the disease and its prevalence before making the film: “The funny thing was that I was not aware of the disease myself. I didn’t know that it even had to do with the liver; that’s how uninformed I was. So when I started to dig deeper I was really shocked by the fact that over 50 percent of the cases are people of Asian descent. That really made me interested.”

Gilead Sciences, Inc. approached Wong to make a film that would spread awareness about hepatitis-B. According to its website, Gilead Sciences, Inc., is a research-based biopharmaceutical company that discovers, develops, and commercializes innovative medicines in areas of unmet medical need. The company is trying to transform and simplify care for people with life-threatening illnesses around the world.

Be About It is the story of two Asian fathers, their families and their reality of living with hepatitis-B, a potentially deadly disease that affects approximately one million Asian Americans. 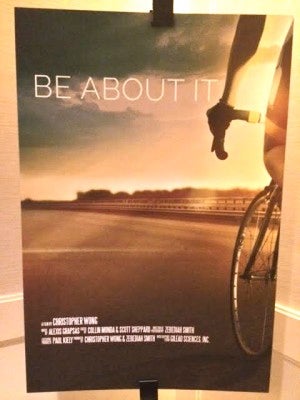 Be About It film poster during screening at The London West Hollywood. HIYASMIN QUIJANO

“Chris, I think you humanize this condition and this is the stuff that politicians who decide funding for hepatitis-B need to watch,” Dr. Fong commented.

Fong stressed the importance of continuing to spread awareness: “This should not be just one photo-op today. This is a message. This is a conversation. This is a discussion you could carry on daily.”

Wang explained his interest in participating in the film project: “My main goal in sharing my family’s story is to help erase the ignorance associated with this virus in the Asian American community.”

He emphasized the need for more hepatitis-B screening: “There is just absolutely no excuse why an individual with hepatitis B-in this day and age goes undiagnosed.”

Most Asian Americans with hepatitis-B contracted it during childbirth from their mothers. That is why tragically, in this community, it is common to see multiple members of the same family suffering from hepatitis-B.

“It is a silent killer; more people die of hepatitis-B than HIV,” stated Filipino American Shawne Jabonero Lopes regarding the disease’s prevalence.

Lopes explained, “I am basically here to tell the story [of my brother AJ Jabonero], a 30-year-old who had hepatitis-B. I have hepatitis-B, and we also lost our father to hepatitis- B.”

Lopes added, “I think within our culture there is a huge stigma around talking about disease.”

When it comes to stigma, the common misconception regarding hepatitis-B is how it spreads, that is, through blood and sexual contact. Sufferers cannot spread hepatitis-B casually, such as through handshaking, kissing and sharing chopsticks or glasses.

According to a Gilead report, first-generation Asian Americans from China, Korea, Laos, Myanmar, Vietnam, India and the Philippines are at particularly high risk for hepatitis-B due to low rates of infant vaccination against the disease in these countries.

Lopes added, “Out of the 1 out of 12 Asian Americans who have hepatitis-B, 25 percent will go on to have complications, but 60 percent do not know they have it.”

She described finding out that she and her brother had the disease: “We found out when my brother was about 3 or 4 and I was about 5 or 6. He had an episode of jaundice. He got really sick, so we went to the hospital, and the doctors ordered a liver biopsy.” After a liver biopsy, the doctors concluded that Jabonero had hepatitis-B and eventually tested all members of their family.

Lopes shared her family’s experience with the tragic consequences of lack of information: “We knew we had hepatitis-B, we just didn’t know what that meant and so went our entire lives basically not really knowing what that meant. In 2005, my dad got really sick. They found a tumor in his liver, and a year later he passed away.”

Melissa Jabonero spoke about her and her husband’s lack of awareness: “In regards to my husband, he didn’t know the type of things you had to do. The first and most important thing you need to do is get tested.”

Dr. Fong provided some basic information on the disease, stating, “Chronic hepatitis-B is diagnosed by a simple blood test,” and the results take two days.

Jabonero urged those with the disease to keep up with testing: “The next important step is knowing where you stand with your viral load. My husband was a very healthy man, mostly vegetarian diet, triathlete, and he didn’t know that he still needed to get his lab work and ultrasounds.”

She added, “I wanted to be a part of this because I don’t want anyone to ever be in my position, which could have been different from something so simple that could have been done such as follow-ups [with liver specialists for testing].”

AJ appeared healthy, but doctors diagnosed him with liver cancer in December 2014, and he died in March 2015.

Most commercial labs provide the test by request. It is not a basic test, so those with a primary care physician would need to request it.

For those worried about treatment costs, Dr. Fong shared, “We have a large number of patients [at the Asian Pacific Liver Center] who receive antiviral therapy uninterrupted through this mechanism [of subsidized treatment options].”

Lopes described her medical routine as follows: “I have a liver specialist [hepatologist] and regular visits twice a year for blood tests and ultrasounds.”

Wong wanted very much to spark a conversation about hepatitis B within the Asian American community. “I really want to do films about Asians and Asian Americans, and so when I found these two characters to follow [Alan Wong and AJ Jabonero], I just felt like, man, these people are brave and honest about the disease and through them we could tell a great story.” 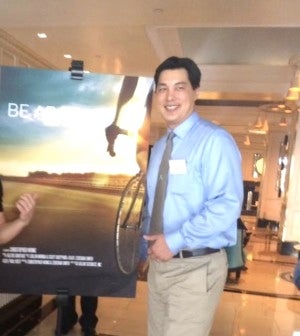 Be About It filmmaker Christopher. HIYASMIN QUIJANO

Dr. Fong described how medical professionals could break the cycle of transmission, ending the prevalence of the disease among Asian American children: “In the last several years, we have come to recognize that we can drop the failure rate from 5 to 0 percent by identifying mothers who have high levels of virus and actually put them on antiviral therapy to bring down the viral load. With this strategy, I hope in two to three generations we will not be talking about kids who end up with hepatitis-B.”

“I have a son, and there is a vaccine for hepatitis-B. He received the three series of vaccines to be immune to acquiring hepatitis-B from me,” added Lopes.

“None of my kids or I have hepatitis-B because we all received the vaccine when we were born,” stated Jabonero.

Nowadays, health care professionals screen mothers in developed countries like the United States for hepatitis-B. If the mother tests positive, they vaccinate the baby at the time of birth, which Dr. Fong stated, “has been able to cut down the transmission rate from 90 to 10 percent.”

Wang said, “I hope this film helps reduce the stigma and encourages more people to talk about it. We really need to create a cultural shift in the way hepatitis-B is perceived in this community.”

May is hepatitis awareness month.

9-year-old girl dies after getting struck by lightning