Fil-Am author breaks the rules in book ‘Latinos of Asia’ 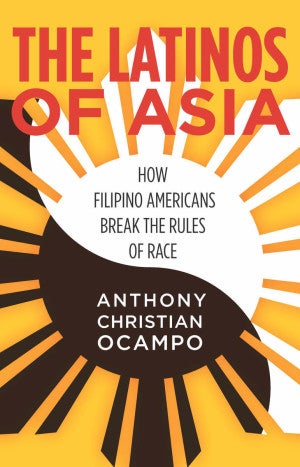 Cover of Anthony Ocampo’s book on Filipinos in America.

LOS ANGELES — For author and professor Anthony Ocampo, 34, the color of his skin has always mattered.

Ocampo grew up in Eagle Rock, California, as the only child of a close-knit Filipino family in a diverse neighborhood.

“When I was in kindergarten, I remember asking my parents about my identity,” he recalled. “I asked about the color of my skin—I didn’t know what a Filipino was, even though I grew up around them.”

Race, ethnicity and identity had always lingered in Ocampo’s mind. In 2003, he graduated from Stanford University—a predominately white, wealthy environment—with a degree in ethnic studies.

“I felt almost invisible there. I took up ethnic studies because I could read about other people’s cultures, and it felt closer to home,” he said. “I could talk about my family and my experience growing up as a Filipino in LA, and suddenly it’s like I have some sort of value in the classroom.” 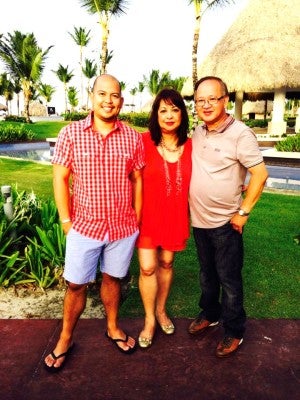 Anthony Ocampo and his parents. CONTRIBUTED

Although he studied Asian American communities in the program, Ocampo felt as though there ware not enough data on Filipinos.

“My professor said, ‘Why don’t you be the one who conducts the studies and writes the books on this stuff?’ So I went to get my PhD.”

Ocampo spent seven years getting his doctorate in Sociology at the University of California, Los Angeles. His thesis and dissertation ended up becoming the basis of his new book, The Latinos of Asia: How Filipino Americans Break the Rules of Race, published in March of this year.

“The idea for a book had always percolated since college. I was involved in a Latino fraternity, and always writing about what it’s like to be a Filipino American growing up in LA, in a place where there are a lot of Latinos. There wasn’t much material that talked about how Filipinos are connected, given our history.”

In 2009, the project became full force. Ocampo began conducting surveys and research, reading up on organizations like the United Farm Workers of America and the League of United Latin American Citizens (both of which used to have all-Filipino chapters). He interviewed over 80 young Filipinos in LA, often from Filipino-dominant neighborhoods like Eagle Rock and Carson.

“I met a ton of Filipinos who felt very similar to Latinos, based on where they grew up, the Tagalog-Spanish overlap, and their connections to Latino heritage and culture,” he said. “That’s the whole point of the book—there a lot of times in which Filipinos feel as though they blend into the Latino crowd. We both have brown skin.”

“When Filipinos try to describe where they fit in America, they often say, ‘We’re kind of like the Mexicans of Asia.’ The book’s title is from the data.”

Ocampo also pulled material from personal experience, hailing from a family of involved political and labor leaders, as well as his involvement in a discrimination class suit against Abercrombie & Fitch: “It was an impactful experience. It was the nail on the coffin that made me want to get involved—I love getting to talk to people about race issues in America.”

He also described the years-long book-writing process. “It’s difficult to convince people why the Filipino story should make it on paper. You’ve got to find someone who believes in your idea and wants to see it through.”

At 30, Ocampo became a professor and started teaching about sociology, race, gender and sexuality at the California State Polytechnic University in Pomona. “I like exposing people to the harsh realities they face, especially as minorities,” he said. “Not as a way to dis-empower them, but to inspire them to be involved.” 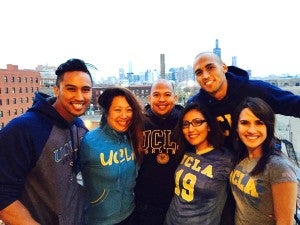 Ocampo (middle) and friends from graduate school at UCLA. CONTRIBUTED

He also openly identifies as gay, and hopes to release a second book about that experience. “It plays a big role in the way I see the world,” he shared. “I meet gay kids around the world, and they identify…it helps for them to see a role model and professor, and to know that there is someone who is writing about their experiences on paper.”

“What’s amazing is when you have someone come up to you, who has read or heard about [the book], and they say, ‘You are writing about me. This is the first time I get to see myself in the written word.’ That’s the most rewarding thing, knowing that something you wrote is affecting someone’s life in a positive way.”

With the release of his book, The Latinos of Asia, Ocampo has had a wide lineup of speaking opportunities, including one at the 16th biennial Filipino American National Historical Conference in New York City.

He said that his overall goal is for the Filipino American community to become more socially conscious and involved, whether in politics, government, arts, law or intellectual pursuits.

“I want them to realize that they can viably tie themselves to Asian Americans and Latinos, two huge and emerging voting demographics,” he added. “To be aware of issues and movements that also affect them. When you don’t know your own history or get involved, you forget. You think that it’s not your problem.”

He also shared words of wisdom with young Filipinos and emerging leaders, encouraging them to be their own heroes.

“At the heart of it all, it’s about this: Be a force to be reckoned with,” he said. “Be completely unapologetic about who you are, and what you have brought to the table. Be humble when it matters. Surround yourself with people who are trying to be the best versions of themselves. Never say ‘I can’t,’ but always ‘Why can’t I be? Why shouldn’t I be?’” [email protected]

Escudero tells Duque: ‘Please just do your job without fooling yourself or us’

After talking tough vs China, US conducts freedom of navigation operation in Spratlys