Catholics and women against Duterte 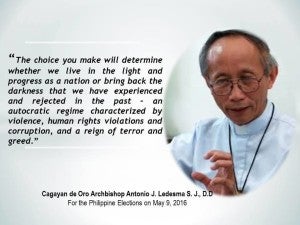 Archbishop Antonio Ledesma of Cagayan de Oro City, a Jesuit priest, just like Pope Francis, has called for all Catholic voters not to vote for a presidential candidate who is a serial human rights violator. He did not name Duterte but simply referred to him as the “Mayor of Davao City.”

In a pastoral letter titled “A Matter of Conscience,” he scored the mayor and other local officials of Davao City for the unsolved extrajudicial killings of 1,424 individuals:

“These killings are immoral, illegal and sinful.” He then added that they could never be justified     whoever the victims are.

He cited Redemptorist priest Fr. Amado Picardal, who knew about these killings perpetrated by the so-called group known as the Davao Death Squad. Picardal said that 57 of the victims were females and 132 were young people ages 12 to 17.

killings cannot be called a city of peace and order,” said Archbishop Ledesma.

He stressed: “As Christians, we believe in the dignity of every person made in God’s   image from which flow human rights — and the most basic of which is the right to life.”

(Please see  article regarding Archbishop Ledesma’s call to Catholics. Please air this far and wide and ask recipients to do the same.)

Indeed, no good Catholic or Christian or any decent individual – can in good conscience vote for or support a mass murderer presidential candidate who openly declares that a policy of extrajudicial killings is an inherent part of his platform, in the name of peace and order.

It has also been revealed that he has millions in deposits in pesos and dollars in various bank accounts and vast real estate holdings in his name and his children’s names. His salary as a mayor is only P78,000 pesos.

This monster from hell is a Pol Pot who will not hesitate to kill masses of people. Killing fields like in Cambodia – will be a common phenomenon if Duterte becomes President. He openly confesses to his involvement in killing over a thousand people.

He also has openly announced his alliance with the Communists, showing much deference in his conference with Joma Sison, also a mass murderer, calling him “Sir” and would welcome him if he became President. As obviously observed, many extreme left elements are actively campaigning for Duterte. The Communists see a great opportunity for them to take over the government with this partnership. Like Hitler and his Nazi party, these godless, amoral conspirators will not hesitate to murder political enemies in their quest for power.

The Catholic Bishops Conference of the Philippines (CBCP), Archbishop Ledesma, Archbishop Villegas and other Archbishops openly call on Catholics to apply their Catholic values based on the teachings of Christ and not to vote for Duterte and tell their relatives and friends to do the same. Priests and nuns are gathering together praying and telling their flocks not to vote for this demon.

In good faith, all well-meaning people must come together. They owe it to God, to their fellowmen and to themselves to prevent the darkness of a terribly evil ruler from falling upon our land. Please do your part and be on the side of what’s right and good.  Bravely face Duterte and the forces of evil. Four days left till Election Day. He cannot be allowed to be President.

This election is unquestionably about the fight between good versus evil.