MNLF looking for ways to save Samal Island captives from Abu 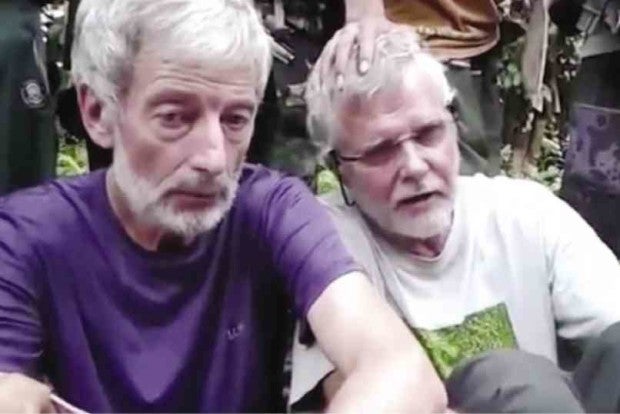 ZAMBOANGA CITY – The Moro National Liberation Front (MNLF) said on Wednesday it has been looking for ways to help secure the remaining captives taken from the Island Garden City of Samal on Sept. 21, 2015 as the Abu Sayyaf released another video in which the hostages pleaded for help.

Dr. Samsula Adju, chair of the MNLF’s Global Roving Diplomacy and Peace Advocacy, told the Philippine Daily Inquirer they have been studying what measures to take to help end the ordeal of Canadian Robert Hall, Norwegian Kjartan Sekkingstad and Filipino Maritess Flor.

“We want to help in their safe release,” Adju said.

But Adju clarified that the MNLF was not considering any armed confrontation with the Abu Sayyaf.

“The MNLF will try its best again to have peaceful negotiation with the ASG leadership to avoid bloodshed and misunderstanding. Negotiation is the best measure to address the peace and security problem of the province. Military option is not the solution,” he said.

In the latest video released by the Abu Sayyaf, the hostages pleaded for a stop to the military operation and for help.

“Please stop shooting at us, trying to kill us. These guys are gonna do a good job of that. To the Canadian government I’m told to tell you to meet the demands. I don’t know what you’re doing but you’re not doing anything for us. John is being sacrificed, his family has been decimated and I’m not sure why or what you’re waiting for,” Hall said, referring to retired mining executive John Ridsdel.

Ridsdel, who was among the Samal Island victims, was killed last week. A video of his beheading was also posted online and had been shared by several bloggers.

One of the militants threatened to kill all three if their ransom demand was not met.

“I’m appealing to the Canadian government, Philippine government, friends, family, anybody who can possibly help us.  If the demands are not met, we will be executed like my friend John a few days ago,” Sekkingstad, who was the first to speak in the video, said.

The Abu Sayyaf has been demanding P300 million for the release of each Samal Island victim.

Earlier, Habib Mudjahab Hashim, chair of the MNLF’s Islamic Command Council, said Sunday’s release of 10 of  14 Indonesian captives was the result of the intercession of MNLF chair Nur Misuari.

As this developed, the Abu Sayyaf freed Chinese national Yahong Tan Lim on Tuesday after holding her captive for nearly two years.

Supt. Wilfredo Cayat, the Sulu police director, said Lim was renuited with her family after she was released in Barangay Danag in Patikul town.

Lim was kidnapped on May 22, 2014 together with her mother, Dinah Tan Iraham, a Chinese businesswoman married to a Basilan local. She was 19 then.

The Abu Sayyaf had demanded P30 million for their release.