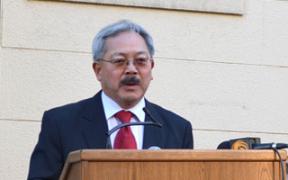 Over the last year, the Mayor’s Office has worked closely with the Board of Supervisors, City Departments, Central American Consulates and the SFILDC to address the record levels of children and families fleeing from Mexico, Guatemala, Honduras and El Salvador.

Initial funding approved by Mayor Edwin Lee had supported the legal representation of 414 children in the San Francisco immigration courts.

The SFILDC reports families and unaccompanied children experienced traumatic experiences and connected them to needed social services such as mental health, medical homes and other critical needs.

The San Francisco Immigrant Legal Defense Collaborative was given $1.8 million in additional funding for the legal defense of unaccompanied immigrant minors.

“Children fleeing Central America and Mexico are forced to migrate due to extreme poverty, and violence in the region.  The journey to the United States through Mexico often leaves children and women vulnerable to human trafficking and violations of their basic human rights,” said Lariza Dugan-Cuadra, executive director of the Central American Resource Center (CARECEN) and fiscal lead of the SFILDC.