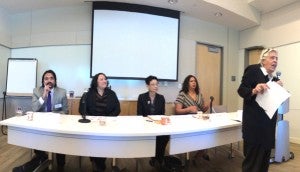 LOS ANGELES – Early childhood education can spell the difference between future failure and success in school and life, community advocates declared at a recent symposium. They also stressed the importance of parental engagement at home and the community in shaping a child’s future.

Early childhood education has become a prominent public policy issue, as lawmakers on all government levels mull funding for preschool and pre-k.

“A Convening of Ethnic Media and Stakeholders: LA County’s Push for Early Childhood Education” was hosted by New America Media at the California Endowment last April 25 for a close look at the landscape of early childhood education (ECE) in the region. Panelists and parents also shared information on current ECE programs.

Gap between knowledge and programs

Barbara DuBransky called attention to the report “What More Has Been Learned? The Science of Early Childhood Development 15 Years after Neurons to Neighborhoods” by Ross A. Thompson, who points out what he calls an unacceptable gap between current knowledge of early childhood development and the use of that knowledge in programs and policies that support young children and their families.

Thompson also asserts that social and economic disadvantage creates “striking disparities” in development that are apparent early and can foretell later academic success.

DuBransky explained that Thompson’s work was important “because the public and Congress had all realized that we’re starting to hear from evidence that this time in human development, this 0 to 5 period and the prenatal period, are very important for predicting how someone is going to be successful in school and life.”

Sandy Close illustrated Thompson’s and DuBransky’s concerns. “The vast majority of children of immigrants are being raised in informal settings and that makes it very clear that it is parents and caregivers who are on the front line, the most important teachers,” Close said, “and you could say that more than anything this is about family engagement and learning how to do the best job, the job I wished I had known better to do with my sons.”

WATCH: Fil-Am chemist JC Reyes and his two-year-old boy, Jiboy Reyes, from Texas spend time after work reviewing chemical names and symbols. The two-year-old has memorized many of the chemicals seen on a periodic table that is usually introduced to children during middle school. VIDEO BY JC REYES

“California has the highest childhood poverty rate in the nation when you adjust for cost of living. That’s a pretty sobering fact. And 50 percent of our children are growing up in poverty and in LA the child poverty rate as about 30 percent.”

In an April 2016 report, the Public Policy Institute of California notes that fewer children from low-income families attend preschool, and those who do are often in public programs.

Home Visiting Partner Programs like the LA Child Guidance Clinic and El Nido Family Centers, in partnership with First 5 LA, are assisting in early childhood development by providing support to families who seek guidance in promoting healthy upbringing for their child, obtaining health insurance coverage and finding a doctor and dentist for check-ups.

Ernesto Saldana acknowledged how privileged his son is to have access to childcare: “What is critical are these first five years. I have a son, he is 22 months old, and I am an older parent, as you can see, this gray hair here.”

DuBransky placed emphasis on the family in terms of participation: “Obviously, the one that’s probably what everyone kind of understands from their gut is the primary relationships in their child’s life have the most impact; that could be a parent, a grandparent, or an older sibling.”

Saldana, who works with parents in Southeast Los Angeles through the Advancement Project in education policy advocacy, highlighted the importance of promoting information about the need for early childhood education: “What we have just really been finding out is the importance of sharing this information, and legislators are really starting to become aware of the issue.”

Jackie Majors is trying to improve early education for those with less access to resources because, she said, “not all families have access to German strollers or have hours to spend with their children.”

Majors echoed Dr. Yonekura in highlighting child poverty, stating, “One in four children LA County are living in poverty and the statistics change every day, but do you guys know what poverty is? The poverty line is about $24,000 a year for a family of four. Crystal Stairs, Inc. serves about 40,000 families and 75 percent are single-mom head of household” families.

Out of the 40,000 families the Crystal Stairs helps each year, Majors said, more than 25,000 children receive subsidized childcare services, almost 2,000 enroll in healthcare services, and more than 700 participate in a head start program for early education.

Majors underlined the importance of ECE programs: “Those [developmental] screenings are very important and are becoming available through head start programs, through other childcare programs, and absolutely through the pediatrician.”

For those who know they need ECE support but do not know how to get that help, DuBransky suggested, “You can always start with [calling] 211 and say you want to make a connection. There are agencies that do support parents.”