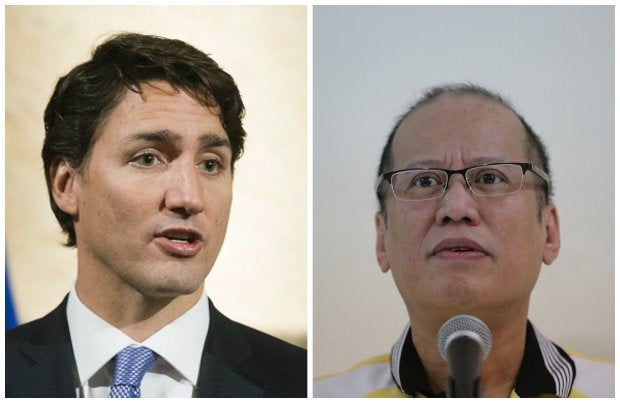 Malacañang did not issue an explanation for the last-minute cancellation of the trip, except to say that the President’s official schedule for the day comprises of “monitoring and paper work.”

Sources from Malacañang and the Defense Department said that Aquino is to hold a security cluster meeting within the day.

“It is likely the President and Prime Minister Trudeau will talk today,” one of the sources said.

In a press conference, Trudeau confirmed the beheading of kidnap victim John Ridsdel, 68, of Calgary, Alberta and expressed outrage at what he called an “act of cold-blooded murder.”

Trudeau said the governments of Canada and Philippines, as well as international partners, would work together to pursue those responsible for Ridsdel’s death.

In a statement, Malacañang said Aquino “has directed the security forces to apply the full force of the law to bring these criminals to justice.”

“There will be no let-up in the resolute efforts of the joint PNP (Philippine National Police)-AFP (Armed Forces of the Philippines) task group in pursuing intensive and wide-ranging military and law enforcement operations to neutralize these lawless elements and thwart further threats to peace and security,” Communications Secretary Herminio Coloma Jr. said

“We extend our deepest sympathy and condolences to the Canadian government and to the family of Mr. John Ridsdel who died in the hands of the ASG bandits,” he said.

Ridsdel’s decapitated head was found in front of the Jolo municipal hall inside a sack. It was then brought to the Camp Teodulfo Bautista Hospital in the village of Bus-bus in Jolo.

They beheaded Ridsdel at around 3:45pm on Monday after his family failed to give them the ransom money they demanded.

The group earlier demanded a P300-million ransom for each of the victims by April 25. RAM

Read Next
Japanese helicopter carrier docks at Subic
EDITORS' PICK
Smart poised to turn PH into ‘Smart 5G country’ with nationwide rollout
Full operation of more sectors, businesses pressed to spur economy
New Vatican ambassador to PH named
Water remains our saving grace right now
We don’t want gov’t to fail, because it’s all of us who will suffer and die — Robredo
Get 80% OFF Ignite 2020 Cyber Tickets starting 28 September
MOST READ
Fernandez: Velasco camp ‘betrayal’ pushes call to retain Cayetano as Speaker
Palace: Some cities in Metro Manila eligible for MGCQ
Mayor Treñas tells Locsin: Iloilo City is much better than what you think
Duterte not keen on extending term — Palace
Don't miss out on the latest news and information.