Japanese, partner caught with P10,400 worth of fake money in Pasay City 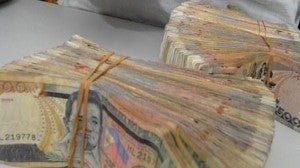 MANILA — A Japanese national and her live-in partner were arrested after they used a fake P500 peso bill to buy two T-shirts in Pasay City, on Sunday night. After being taken into custody, authorities were able to retrieve a total of P10,400 worth of fake money in the possession of the couple.The Pasay City police identified the live-in couple as Yuki Koguchi, a native of Tokyo in Japan, and Abdul Datumanong.  They both reside at Sitio Imelda in Taguig City.

Initial reports stated that the two were buying shirts from a stall along Taft Avenue Extension near Baclaran Market at around 9 p.m. when its owner, Lucita Taganos quickly noticed that the two were using fake money because of the P500-bill’s refined texture. Taganos immediately sought assistance from a barangay tanod (village watchman) to invite the couple for questioning.

It was during the initial inquiry when Yuki surrendered a pink-colored wallet that contained P10,400 worth of fake money to Rasul Sultan, the tanod of Barangay 79. Sultan said he recovered from their possession 18 pieces of P500 bills with the same serial number ER453531 and seven P200 bills sharing two common serial numbers.

Barangay investigator Amer Abbos said that aside from the same serial numbers, the bills were also bright and slippery, signs that they were not authentic.

Meanwhile, Joel Doria, the city’s senior superintendent, said that the two would be charged with estafa and illegal possession and use of false treasury and bank notes. The two are currently detained at the city police’s headquarters along FB Harrison Street.

He added that it was the first time that they apprehended a foreign national for such a crime. (With a report from John Cyril Yee, trainee)  SFM

Read Next
Customs seize 15,000 sacks of Thai rice at Subic
EDITORS' PICK
Writers’ groups join outcry over KWF move
Taiwan’s foreign ministry thanks U.S. for maintaining security in Taiwan Strait
Authors unbowed after gov’t ‘purge’ of books
Powered by style, innovation and passion
A laptop that maximizes your WiFi so you can maximize your productivity
House energy committee chair Arroyo bats for cheap electricity
MOST READ
Arjo Atayde reveals proposal to Maine Mendoza was ‘more than a year’ in the making
‘FPJ’s Ang Probinsyano’ officially ends after nearly 7 years
Most wanted person in Cebu arrested — PNP
Pagasa: Cloudy Saturday with possible rain showers; LPA spotted outside PAR
Don't miss out on the latest news and information.