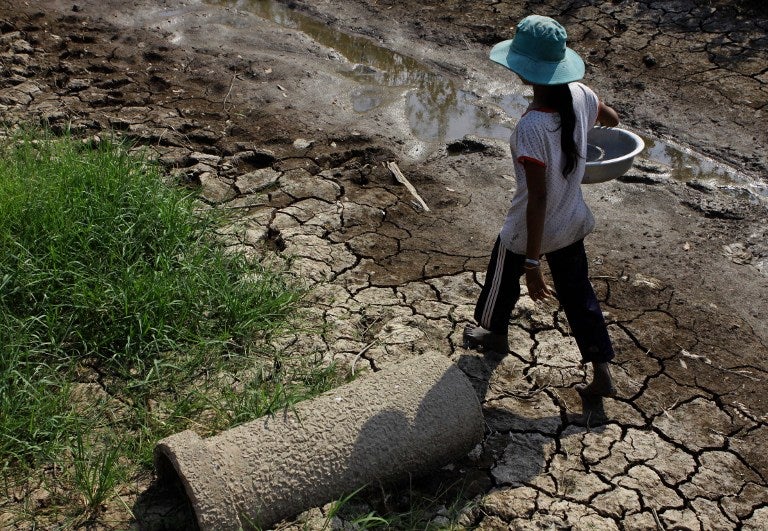 This picture taken on March 8, 2016 shows a girl walking along a nearly dry canal in the Long Phu district in the southern Mekong Delta province of Soc Trang. Vietnam is suffering its worst drought in nearly a century with salinisation hitting farmers especially hard in the crucial southern Mekong delta, experts said. AFP

Across much of central and north-eastern Thailand, Laos, Cambodia and Vietnam’s Mekong Delta rice bowl, temperatures are soaring into the 40s, and are likely to stay there until around the middle of next month.

A second year of summer drought has been exacerbated by the El Nino effect. On Friday, Thailand’s meteorological office said a heatwave late this month or early next month would push temperatures to 43 deg C or 44 deg C.

Vietnam’s coffee growers have suffered, as have Thailand’s rice farmers. But while a supply dip could raise coffee prices, rice prices might not be affected, analysts say.

Scientists say the good news is the El Nino effect will start fading towards the end of next month and annual monsoon rains will begin.

Meanwhile, in village after village, water tanks are dry, grass has withered and the ground is baked and cracked underfoot.

How bad the impact of the drought will be on agricultural output – not just of rice in Vietnam and Thailand but of commodities such as coffee in Vietnam – is still uncertain.

“This is not stopping here. It’s going to get worse and worse,” says Rolan Colieng, 28, as she looks at her coffee farm in Vietnam’s Central Highlands, where the family has had to cut down swathes of dried-out coffee trees.

Her family is part of the K’Ho ethnic minority group, which has grown coffee for four generations, and has culled 500 trees. The community’s 50ha of coffee usually yield 100 tonnes per season but might provide only half of that this year, she estimates. Blackouts happen twice a week on average because nearby dams that produce the hydro-power have seen reservoirs dry up.

Down south in the delta, rice output was down by 200,000 tons in the winter-spring season compared with the same period last year, for a total of 11 million tons, says Bui Chi Buu, a senior researcher at the Institute of Agricultural Science for Southern Vietnam.

Losses from the drought rose to nearly US$250 million after coffee, fruit and vegetable and cash crops, as well as 4,500ha of aquaculture farms, were destroyed, Vietnam’s Central Steering Committee on Natural Disasters Prevention said this month.

This is the worst drought in a century, Buu tells The Straits Times. Some 167,000ha of rice and tens of thousands of hectares of coffee have been affected by drought and salinity, with the Central Highlands – home to many of Vietnam’s ethnic minorities – being the worst hit.

“Vietnamese people have a proverb: ‘Have a crop failure for one year, be poor for three years’,” says Buu. “So this will not affect us immediately, but in the longer term.”

With the drought having killed off coffee trees, and low yields from older trees, which account for 35 per cent of the total, Vietnam’s coffee exports could shrink by 25 per cent this year to one million tonnes, Luong Van Tu, the chairman of the Vietnam Coffee and Cocoa Association, told Reuters this month. Tighter supply from Vietnam could see global coffee prices going up.

In Thailand, Vichai Sriprasert, the president and chief executive of exporter Riceland International, estimates that the second rice crop could suffer a 30 per cent fall in output.

It is a close estimate, says Dr. Nipon Poapongsakorn, a distinguished fellow of the Thailand Development Research Institute Foundation, a local think-tank.

But the second rice crop is only part of Thailand’s output, he emphasises. Even though there is not yet enough data to conclusively establish the impact of the drought, the main crop yield last year came to 23.5 million tons, while the dry season or second crop yield was 5.4 million tons.

This year, the main crop yield is forecast to be up to 25.2 million tons – and the second crop should go down to around 3.9 million tons, says Dr Nipon.

Thailand is not in danger of experiencing a rice supply shortage, given that it still has some 13 million tons of old rice in warehouses, Vichai notes.

The second crop yield has never been this low, he says. Yet, world rice prices, which have been low, will remain low, he predicts – because demand is also down, amid an uncertain global economic environment.