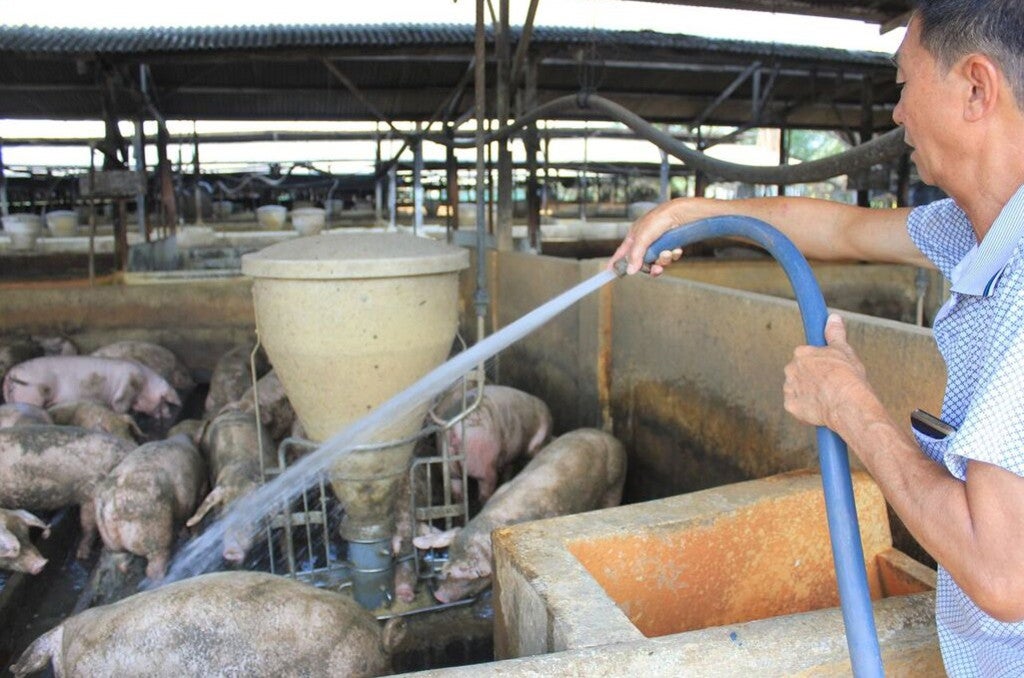 Pig farmer Chung Hock Meng hosing down his animals. Rising temperatures have forced him to cool down his pigs by giving them more water and showering them regularly, as well as by keeping electric fans switched on. PHOTO from The Straits Times/Asia News Network/TRINNA LEONG

The hills were filled with lush green hues several months back, but as farmer Derek Tan looks at his 4ha fish and vegetable farm in Broga in southern Selangor, brown patches of soil occupy spots where leafless vegetation lies.

“Our water sprinklers are working harder than usual, but still the heat is too much to bear – vegetables are just not growing fast enough,” Tan told The Straits Times.

The farm, located at the edge of a forest, is lucky as it is still able to source fresh water from its ponds to keep its soil moist – a feat that would leave many farmers in envy. The ponds had water piped into them from a nearby stream.

A heatwave in South and Southeast Asia is hitting the region’s crops and livestock as the cyclical climate phenomenon known as El Nino absorbs tropical countries’ sources of water.

In Malaysia, farmers are staring at a prolonged dry season, topped with escalating temperatures that are hitting 40 deg C.

As dams dry up, the Malaysian authorities say some states have reduced the release of water to be treated at plants and piped to homes.

The drought is expected to last until June and may even drag on till September, with rainfall decreasing by between 20 per cent and 60 per cent.

The authorities are rationing water in the worst-affected areas while schools had closed in several districts in Pahang and Perlis.

The levels of water in some rivers and dams have dropped sharply throughout Malaysia.

High temperatures have also brought back the haze temporarily as swathes of land with peat areas in Selangor’s Sepang and Kuala Langat caught fire.

Most farmers still rely on natural sources of water such as rivers to minimise costs, and with the heat rising, they can only hope that these water sources keep flowing.

In the north, Kedah and Penang paddy farmers do not have enough water to begin planting their lands, as water from the dams is not being released downstream in sufficient volumes.

“We are already providing shade and more water for vegetables to grow, besides that it’s beyond our control,” said Alen Lee, Tan’s business partner.

Production in farms is already on a decline, as Lee saw his daily crop collection fall by 40 percent despite having four fish ponds doubling up as fresh water reserves for the vegetables. Agriculture and Agro-based Industry Minister Ahmad Shabery Cheek said on Thursday that the hot weather would reduce Malaysia’s chicken egg production by 5 percent to 10 percent, stemming from farmers who still operate open farms instead of temperature-controlled indoor ones.

But it is not just residents who are cranking up the air-conditioning at home, as livestock farmers are switching on fans to keep animals cool.

“We live in hot and humid weather, it’s unavoidable, so you have to be willing to spend on (the) electricity bill to get the water pump and fans working,” said Chung Hock Meng, a pig farmer in Tanjung Sepat, a coastal town in Selangor’s south-west.

Farmers say they are not surprised any more by changing weather conditions and can only find ways to adapt.

“We already saw how fast our fish pond dried up last year,” said Lee, adding that the annual rise in temperature pushed him and Tan into digging three more fish ponds – all of which are rearing tilapia fish with electricity running 24 hours a day.

The farming duo also looked for an additional natural water source nearby to ensure sufficient water storage. Apart from that, they are left at the mercy of nature.

“You can’t fight nature. All we can do is shower the pigs, give them more water and make sure the fans keep the area cool,” Chung said as he hosed pigs in the afternoon heat.