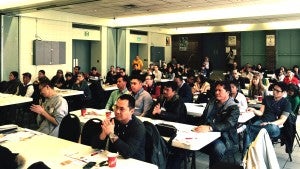 TORONTO, Ontario — Aimed at “unit(ing) Filipino workers toward strong and effective labor unions” and “build(ing) capacity for a united voice and greater participation (in) union growth,” the first Filipino Workers’ Network (FWN) Conference was held April 9, 2016 at the United Steelworkers Hall on 25 Cecil Street in Toronto

The milestone event featured Philippine-born Maria Castaneda as keynote speaker. She is the highest- ranking woman labor leader of Asian descent in the United States, representing 1199 SEIU Health Care Workers East, a union of over 400,000 members from the states of New York, Massachusetts, New Jersey, Florida, Maryland and the District of Columbia. 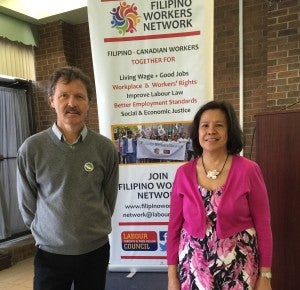 As Secretary-Treasurer of the union, she continues to fight for immigrant rights because she believes it will improve the economy and raise standards for all working people.

Toronto and York Region Labor Council President John Cartwright gave the attendees to the conference an overview of the history of the labor movement in Ontario.  He also encouraged union members to participate in creating an environment that encourages members to be fearless in speaking out for equality and justice in the workplace.

A carpenter by trade, Cartwright was formerly the Business Manager of the Construction Council and co-chair of the Metro Jobstart Coalition.  The Toronto and York Region Labor Council represents 205,000 union members in Canada’s largest urban center.  The Labor Council encouraged the formation of the FWN and helped to organize this initial conference.

The third speaker, Rick Esguerra, discussed Filipino immigration to Canada.  Esguerra is a member of OPSEU Local 200 at Canadian Blood Services in Brampton, Ontario.  As a social justice advocate, he has worked with the Canadian churches’ 10 Days for Global Justice Campaign, as well as with NGOs (nongovernmental organizations) in public education, research, advocacy and international solidarity for social justice and human rights issues.  Before he came to Canada, Esguerra taught political science and international development in the Philippines. 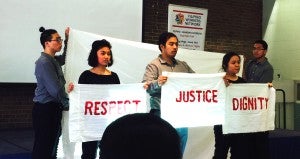 To keep the attendees’ interest high, members of the Carlos Bulosan Theater group, using simple white cloth banners painted red with “Justice,” “Respect” and “Dignity” mimed the actions of workers carrying out daily tasks, while voicing out their hopes and heartaches through rhyme and song.

The attendees were assigned to one of five workshops in the afternoon: Changing Workplace, Fixing the Law, with Andria Babbington and Ben Corpuz, speakers; Health and Safety in the Workplace with speaker Mark Austin;  Collective Bargaining and the Grievance Process with speakers Lis Pimentel and Allan Pace;

The Filipino Workers Network was formed in 2014 to bring Filipino Canadian workers together to discuss issues that impact the labor community.  Crucial topics included a living wage, good jobs, workplace and workers’ rights, engaging union members and helping mobilize sectors to improve labor law and employment standards, among others. 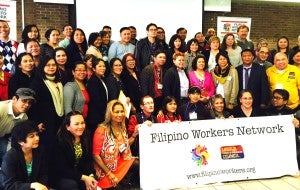