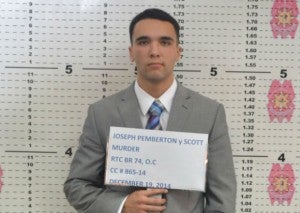 Pemberton sent a notice to the regional trial court (RTC) here on Monday (April 18), signifying his intention to elevate his case before the Court of Appeals.

Pemberton, through his legal counsel, said he would appeal the Dec. 1, 2015 decision of Judge Roline-Ginez Jabalde of RTC Branch 74 that found him guilty of killing Filipino transgender woman Jeffrey “Jennifer” Laude in a motel here on Oct. 11, 2014.

In the notice of appeal, Pemberton’s lead counsel Rowena Garcia-Flores said his client was challenging Jabalde’s ruling on “both questions of facts and law” before the appellate court.

Flores said they would also appeal Jabalde’s order last March 30 denying Pemberton’s omnibus motion seeking partial reconsideration of the the court’s guilty verdict, his application for bail, and his request for clarification on the American soldier’s sentence.

Laude’s kin and their lawyers have yet to comment on Pemberton’s intent to appeal at the CA.

Lawyer Virgie Lacsa-Suarez, one of the counsels of the Laude family, said she received a copy of the notice only on Wednesday.

Although the court affirmed its original decision to convict Pemberton for Laude’s death, Jabalde reduced Pemberton’s jail term from the maximum 12 years to 10 years in her latest ruling.  SFM