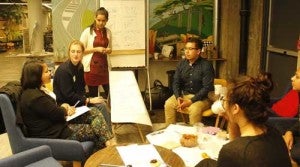 SAN FRANCISCO — Like a hackathon but for immigration reform, a recent San Francisco Bay Area DACA-thon brought young people together to strategize about how to get more immigrants to apply for Deferred Action for Childhood Arrivals (DACA).

Applying for DACA allows certain undocumented immigrants who came to the United States as children to obtain temporary relief from deportation, as well as access to work permits, social security numbers and other benefits.

Yet only about 62 percent of eligible Californians have applied for DACA, according to Sharon Hing of the Immigrant Legal Resource Center (ILRC).

Among the groups with the lowest application rates are Asian American Pacific Islander (AAPI) communities. Misinformation about DACA is common, said Hing; there are few portrayals of Asian American DACA recipients in the media, and some people mistakenly think the program is only for Latinos.

To tackle this challenge, local young people, including current DACA recipients, formed teams to design communications campaigns to get more eligible Bay Area residents (who live, work or go to school in San Francisco) to apply for DACA.

The event’s emcee was Ju Hong, outreach coordinator of the Asian American and Pacific Islander (AAPI) National DACA Collaborative, who is a DACA recipient himself.

Hing of ILRC explained the DACA program and outlined some of the benefits of becoming a DACA recipient, including access to job opportunities and health care. “What are some of the other benefits of DACA?” she asked the group.

“You can go to the club with an ID!” offered Hong, who said that getting into nightclubs was one of the most popular benefits of getting DACA for young people.

The group then divided into three teams to draw what DACA meant to them.

Several participants drew things meant to illuminate – a light bulb, a window with the shutters thrown open, a shining sun. (For many, getting DACA means being able to be open about one’s immigration status for the first time.)

Then came a brainstorming activity called “Crazy Eights.” Participants divided a piece of paper into eight sections and drew a different idea in each box. With only 40 seconds for each sketch, teams drew like mad anything they could think of to get people to apply for DACA.

One participant drew a remarkably accurate stethoscope and wrote “Immigration check-up?” next to it.

Another participant came up with a DACA fairy — “Like the Tooth Fairy, except for DACA.”

Groups then started to narrow down ideas and come up with viable campaigns. The room was abuzz.

Everyone split up into new groups to practice their pitches and get feedback. Then they went back to their original groups to refine their campaigns and finalize their presentations.

Each campaign tackled the challenge in a different way.

Hong Mei Pang of Chinese for Affirmative Action described her team’s campaign as a way to “normalize” people’s perceptions of DACA recipients by focusing on their identity as locals, as opposed to their undocumented immigration status.

Arturo Fernandez of UC Berkeley explained that his team’s campaign used the platforms Chinese Americans trust most and incorporated trusted messengers such as public officials and community leaders.

Denise Wong of API Legal Outreach said her team’s campaign aimed to combat people’s fear of applying for DACA by making it fun and using entertainment to get the message across.

A panel of judges from ASPIRE, FWD.us and API Legal Outreach crowned the first team the winner, but said all of the ideas had elements that would make for successful campaigns.

Participants signed up to help implement a campaign over the coming months.

Next up: making it a reality. Stay tuned for more DACA-related action in the near future.

The SF Bay Area DACA-thon was sponsored by San Francisco’s Office of Civic Engagement and Immigrant Affairs. For more information about DACA workshops in San Francisco, go to: dacasf.com.