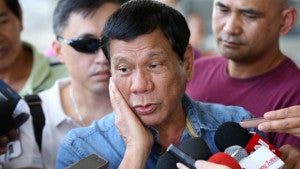 NEW YORK CITY — At a recent rally Rodrigo Duterte, apparently the front-runner in the presidential elections to be held in a little less than three weeks, trivialized the 1989 horrendous gang rape and murder of Jacqueline Hamill, a 39-year-old Australian missionary, as she and others were held hostage by convicts in a Davao prison. In Tagalog that was laced with profanity, Duterte the mayor then, said, according to a transcript of his talk translated into English, as found on rappler.com:

“When the bodies were brought out, they were wrapped. I looked at her face, son of a bitch, she looks like a beautiful American actress, son of a bitch, what a waste. What came to mind was, they raped her, they lined up. I was angry because she was raped. That’s one thing. But she was so beautiful, the mayor should have been first. What a waste.”

How’s that for finesse and empathy? His followers at the rally laughed at his comments and dismissed the firestorm that his way-off-the-rails macho idiocy provoked as a joke, though Duterte himself says he wasn’t joking. He insists it was said in anger.

The man isn’t backing down. If indeed his statement reflected his true feelings, then one may ask, angry with what and with whom?

Rape is the imposition of sexual dominance on a person unwilling to be so dominated but unable to fight it off. Consider that the appeal of a candidate such as Duterte to so many of those who have given up on society and are thus feeling especially vulnerable, is that this strongman will protect them. The weak and the powerless, the law-abiding have-nots, can look up to him as their savior. And isn’t a helpless woman, the sanctity of her body and her life threatened, a classic example of vulnerability?

You would think then that the savior Duterte claims to be would have been moved to pity, that he would have wished, viewing the lifeless body of that young woman, to have been there to protect and shield her from the thugs who violated her. Instead, by these remarks, he proves himself no better and perhaps worse than those men. Thus, when he insists he said all this in anger, I believe him, but not for the reason that he may wish us to deduce.

He was angry because naunahan siya! How dare those prisoners beat him to the punch! In a dog-eat-dog world Duterte’s anger is not surprising; the alpha male must always be the first to claim any prize, no matter how illegitimate. This Duterte understands and understands very well. Anyone who doesn’t toe the line set down by him is a threat, a putative criminal to be judged summarily and, if necessary, disposed of.

I met the man in the early 1990s, when he was already mayor, and interviewed him over lunch one day at a roadside restaurant in Davao. He had come to our appointed place by motorcycle, accompanied by two bodyguards, also on motorcycles. I recount this in my travel memoir Eye of the Fish: A Personal Archipelago. He looked fit, a revolver tucked into his waistband to accentuate his tough-guy image.

He was eloquent, charismatic, and professed not to care about ideological labels, declaring that “I am a Filipino, I love my country, I’ll die for it. I am the mayor of all the people, Muslims, Christians, rightists, leftists.” By the time I met him stories about his bent for vigilante-style justice were widespread. I asked him about these stories, about individuals being pushed out of helicopters, which he neither confirmed nor denied. He seemed to derive pleasure from such tales. Here is how I end my description of him:

“With his masculine good looks and gung-ho spirit, he embodies the image of a righteous warrior for the citizens of the city, never mind that he may have violated the civil rights of a few people. … After lunch as he strides off to his mechanized steed that is gleaming in the afternoon light, I thought he would look even better in a ten-gallon hat. I can’t help but be reminded of how many Filipinos had endorsed the strong-arm tactics of Ferdinand Marcos at the outset of martial law, how attractive the idea that one person could prevent the slide towards anarchy had been. Public order was needed, as was rice on the table. Provide both, and you would be forgiven a multitude of sins.”

This alpha male is no joke, and the laughter he provokes is not one of merriment but rather of disbelief, cynicism and betrayal.