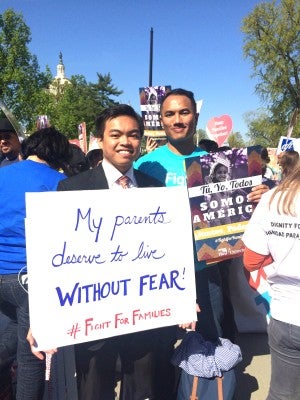 WASHINGTON, D.C. — Raymond Partolan, a 22-year-old son of Filipino undocumented immigrants, flew in from Atlanta, Georgia, so he could participate in last Monday’s rally in front of the Supreme Court where thousands of others drew attention to the plight of millions of individuals and families who would benefit from temporary immigration relief, like protection from deportation.

About 200 people were already gathered at the steps of the nation’s highest court when Partolan arrived that morning at 8 ‘clock, carrying a handmade sign, “My parents deserve to live without fear.” Joining him were a dozen Filipino American activists, leaders of Washington-based civil rights organizations.

DAPA, which includes benefits for parents of U.S. citizens and permanent residents, was initially blocked by a federal judge in Texas and later a federal appeals court upheld the preliminary injunction.

As a result, millions of undocumented immigrants who qualified under DAPA or expanded DACA have been denied the opportunity to receive temporary relief from deportation and to apply for work authorization. A decision is expected in June.

Partolan himself has availed of Obama’s 2012 DACA program allowing children of undocumented immigrants to get a driver’s license, a work permit and apply for scholarships. The day his application was approved, “I jumped for joy, because I felt I could now start living freely without looking over my shoulder,” he said. “DACA changed my life for the better.” 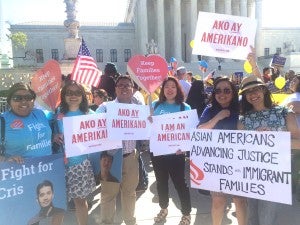 Joining 4,000 others who rallied outside the Supreme Court are (from left) Nisha Ramachandran and Mary Tablante of NCAPA, Justin Trinidad and Janet Namkung of OCA, Marita Etcubanez and Ameesha Sampat of Asian Americans Advancing Justice | AAJC). BEN DE GUZMAN

And, he added, the decision of eight justices could potentially change the lives of millions of others who are living in the shadows.

But upholding Obama’s action is just a temporary fix to the nation’s broken immigration system. Still, Partolan believes, “these families deserve to be together, not torn apart, and live a quality of life with dignity and respect.”

Partolan’s parents were very much in his mind as he joined in the chants and waved his sign.

They came to the United States in 1994 when Raymond was barely a year old. His father was contracted by a Macon, Georgia company to work as a physical therapist, but he overstayed his visa, lost his legal status and consequently his job.

Raymond’s mother gave birth to a brother three years after they arrived, followed by another brother nine years later. “Since then we have become a mixed-status family,” Partolan said. “Three undocumented immigrants and two American citizens.”

To support a family of five, “my father had to settle for lower-paying jobs, like filling up gas tanks,” Partolan said. “Dad used to take care of patients. Today he is pushing boxes in a warehouse. My mother cleans people’s homes, hotel rooms and waits in restaurants.”

But the Texas court challenge suspended its implementation. “It dashed our hopes and broke my father’s heart,” Partolan recalled. “That’s why I’m here today. As an undocumented person myself who has greatly benefited from the implementation of DACA in 2012, I stand in solidarity with families like ours who have yet to qualify.” 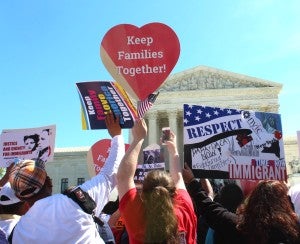 As program coordinator for Asian Americans Advancing Justice Atlanta, a job offered to him after he graduated from Mercer University, Partolan has used his position to continue his advocacy work for social justice. He has organized community action to welcome Syrian refugees and speak out against Islamophobia. He is also actively engaged in mobilizing voter education and voter registration drives. What spurs his activism, he said, is his undocumented status and the example he sets for others living in the shadows.

“I found out I was undocumented when I was 10 years old,” he said. “My parents told us not to say anything about our status, or we could be arrested and deported back to the Philippines. But in my junior year in high school, I finally confided to a friend, only to be treated with indifference like I don’t matter. It was the lowest point in my life. I retreated into my shell and tried to commit suicide. I felt like I didn’t belong here. The United States of America is my only home. It is the only place I know, the only place I know how to exist.”

But with his parents’ love and understanding, Partolan turned things around. “Ever since that moment, I pledged to myself never to try something so final. I know I have unique talents, so I decided to make a positive impact and make a difference.”

In 2009, three years before Obama’s executive order, Partolan became an outspoken advocate for immigration reform. “Being undocumented is such a huge part of who I am,” he said. “I want to own it, but not let it hold me back.”

At Mercer University where he majored in political science, he was elected student body president in his junior year. He started a campaign to make the campus a welcoming place for the undocumented, sparking a conversation that he hopes will be his legacy. “In Georgia alone, 134,000 individuals out of 500,000 undocumented immigrants (including 51,000 Asian Americans or 13 percent of the total number) are expected to qualify for DAPA. Asians are impacted as well, not just Latinos.”

Although a great majority of those who took part in Monday’s massive rally were Latinos and Hispanic Americans, there was a large contingent of Asian Americans from the Asian Americans Advancing Justice (AAJC), the Diverse Elders Coalition, National Council of Asian Pacific Americans (NCAPA), National Korean American Service & Education Consortium (NAKASEC), Organization of Chinese Americans (OCA), and the South East Asian Resource and Action Center (SEARAC).

AAJC has noted that the new DAPA initiative and expanded DACA would benefit at least 400,000 Asian and Pacific Islander immigrants nationwide. “We applaud the Supreme Court for agreeing to hear this case,” said AAJC-Los Angeles Exec. Director Stewart Kwoh. “We hope they correct the lower court’s ruling, and recognize correctly the legal authority of the president to exercise discretion in immigration enforcement.”

This point was stressed repeatedly during the rally by several speakers. Senate Minority Whip Dick Durbin (Dem-Illinois) said when Obama created DACA, he used his authority as president to allow certain undocumented youth to remain in the country legally. 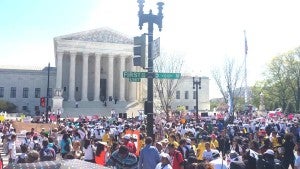 A massive rally heats up with chants while the Supreme Court justice hears oral arguments on the legality of Obama’s executive actions on immigration. JON MELEGRITO

“DACA remains in effect and isn’t being challenged by the Supreme Court,” Durbin said. “Young people are no longer whispering in the dark. They are standing here today — undocumented and unafraid. They’re asserting their rights to be part of the future of America.”

Arriving in Washington Saturday, Partolan toured the city and checked out the museums and monuments. At the National Museum of American History, he paused for a long time reflecting on the Star Spangled Banner Exhibit.

“As I stared at the American flags, I remembered that my uncle served in the U.S. Air Force and my grandfather served in the Vietnam War,” Partolan said.

“Reflecting on their proud military service, it brought tears to my eyes thinking about my own parents’ struggles, hoping someday they too would enjoy the same rights living in a country under whose flag my uncle and grandfather proudly served.”

He saw U.S. flags again Monday morning, flying above the Supreme Court. “I was reminded of what they represent, for me and my family, and the 4,000 who came today from all over this great country, believing that America welcomes them, that they can be part of America’s future too.”

But that means continuing to fight to fix the nation’s broken immigration system and institute comprehensive immigration reform.

In a Facebook post shortly after Obama’s 2014 announcement, Partolan wrote: “The fight is not over. Millions were left out of this announcement. Without actual congressional action, nothing is solved. This is merely a bandage on an open wound.”