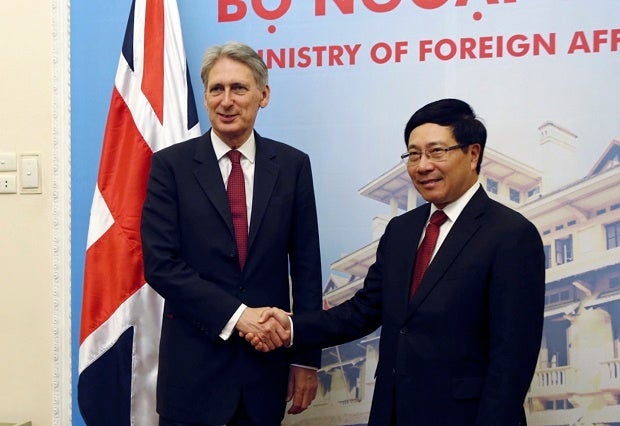 HANOI, Vietnam — British Foreign Secretary Philip Hammond has urged claimants of the South China Sea to refrain from the use of force and uphold international law in resolving their disputes.

“It is our firm view that claimants (of the South China Sea ) should refrain from the threat or use of force and from unilateral actions such as deployment of military forces and equipment on disputed maritime features,” Hammond told reporters Tuesday at a press briefing with his Vietnamese counterpart Pham Binh Minh in Hanoi.

He said Britain has “strong national interests in the continued stability and security of this region.”

His comments come at a time when massive land reclamation by China and increased military action in the South China Sea have raised concerns among countries in the region and the United States.

Hammond is on a two-day visit to Vietnam to seek ways to expand trade and investment with the Southeast Asian country.

Fishing amid territorial disputes in the South China Sea