Fishing amid territorial disputes in the South China Sea 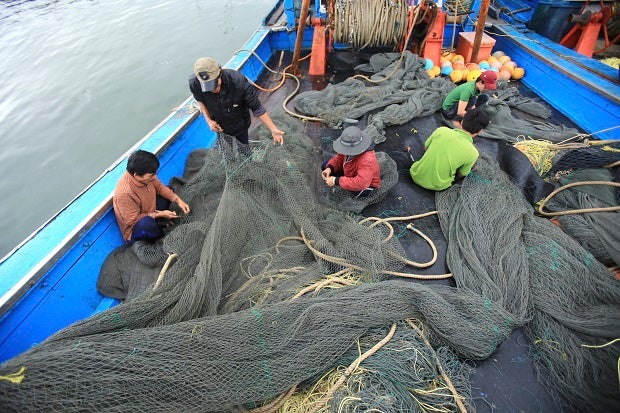 In this March 27, 2016, photo, Vietnamese fishermen fix nets on their boat as while docked at Tho Quang port, Danang, Vietnam, after a fishing trip in the South China Sea. Fishermen from around the South China Sea tell stories of contending with bandits and coast guards. As tensions ratchet up, it is perhaps those who make a living at sea who feel it the most. AP

CATO, Philippines — As Asian countries jostle for territory in the South China Sea, one Filipino fisherman is taking a stand.

He has faced down Chinese coast guard rifles, and even engaged in a stone-throwing duel with the Chinese last month that shattered two windows on his outrigger.

“They’ll say, ‘Out, out of Scarborough,'” Renato Etac says, referring to Scarborough Shoal, a rocky outcropping claimed by both the Philippines and China. He yells back, “Where is the document that shows Scarborough is Chinese property?”

At one level, the territorial disputes in the South China Sea are a battle of wills between American and Chinese battleships and planes. At another level, they are cat-and-mouse chases between the coast guards of several countries and foreign fishermen, and among the fishing boats themselves.

Indonesia seized a Chinese fishing boat last month and arrested eight fishermen, only to have a Chinese coast guard vessel ram the fishing boat as it was being towed, allowing it to escape.

Vietnam’s coast guard chased away more than 100 Chinese boats over a two-week period, its state media reported this week, and made a rare seizure of a Chinese ship carrying 100,000 liters (26,400 gallons) of diesel oil, reportedly for sale to fishing boats in the area.

The South China Sea, a hodgepodge of overlapping territorial claims in the Pacific, is both strategically important and a vital shipping route for international trade. It may also contain valuable oil and natural gas reserves.

As tensions ratchet up, though, it is perhaps those who make a living at sea who feel it the most. Here are some stories from fishermen around the region:

Philippines: The Guardian of Scarborough Shoal

Renato Etac has had dozens of encounters with Chinese ships.

More than once, a small team of Chinese coast guardsmen on a rubber boat approached his boat and pointed their rifles at him, but he says he knew they would not fire and risk starting a war.

At other times, the Chinese will surge as if to hit his boat, but the 37-year-old fisherman uses his keen knowledge of Scarborough Shoal — where he has fished for Spanish mackerel, trevally and grouper since he was a teenager — to outmaneuver them.

Etac says he just wants to defend his livelihood in waters that used to be open to all. China took control of Scarborough Shoal in 2012 after a two-month standoff with Philippine government ships. It sits about 230 kilometers (145 miles) west of the Philippines, and 1,000 kilometers (620 miles) from the Chinese coast.

“It’s like quarreling, like playing games,” he says. “Yelling, dirty finger, everything’s there. Sometimes I use expletives in different dialects and I get to laugh when I see them, because they don’t understand what I’m saying.”

He enjoys what he calls the territorial “debates” in the high seas, though his earnings from a weeklong fishing expedition have dropped by more than half to 3,000 pesos ($63), because of both the Chinese disruptions and competition.

“He’s like the guardian of Scarborough, sir,” said Greggy Etac, a relative and a fellow fisherman. “I used to sail with him, but now, I’m scared.”

China: Coast guard to the rescue

Chinese fishermen working out of the Hainan island port of Tanmen say they now enjoy much greater support from their country’s beefed-up coast guard.

They have been forced to range further out to sea because of the heavy depletion of coastal fisheries, says Li Xianchuan, a 64-year-old crew member who has been fishing in and around Scarborough, the Spratly islands and the closer-in Paracels — claimed also by Vietnam — for 40 years.

“There are many more fish in the Nansha islands, particularly Huangyan island,” he says, using the Chinese terms for the contested Spratly group and Scarborough Shoal.

In previous years, Chinese government ships would issue radio warnings about the presence of Philippine patrol ships around Scarborough Shoal.

“It was very dangerous and scary,” he says, as his 90-ton vessel takes on fresh water in preparation for a foray into the South China Sea. “We had to run around the reefs to get away from big (Philippine) boats. Thanks to the shallow water and submerged reefs, their big boats could not enter the reefs. We played hide-and-seek inside the reef until their boats gave up and left.”

Conditions for Chinese fishermen have vastly improved with the addition of new and larger Chinese coast guard vessels and a more proactive approach, Li says. A call to the coast guard will bring help within two to three hours, he says.

Fishing in the South China Sea remains perilous, Li says. Fishermen must contend with rogue sailors from Vietnam, the Philippines and Malaysia who might try to rob them of their catches and fishing equipment. Li says he has been fired on once, and knows of several fishermen killed in encounters with Philippine boats.

Taiwan: Fear of banditry at sea

Heightened competition, and even banditry, is making it ever-harder to make a living, says Taiwanese fishing boat owner Hong Huai-jen.

“Now, they are not only fishing in the South China Sea, but have also broken into our territorial waters,” Hong says, standing by his boat in the southern Taiwan port of Donggang, which looks out on the Taiwan Strait.

His boat was surrounded last November by a group of Vietnamese fishing boats in waters off Taiwan, presumably for the purpose of robbing him. He managed to give them the slip and called the Taiwanese coast guard for help. The Vietnamese boats had dispersed by the time help arrived.

“Taiwanese fishermen don’t have any weapons,” Hong says. “Once they board our boats, there’s nothing we can do. We would be detained and we have to pay for our release.”

He has been fishing for 14 years from his home port on Xiaoliuqiu, an island in the Taiwan Strait.

“There’s a big difference compared with the business we had before,” he says. “My father has worked as a fisherman for about 40 years. The fishery resources were rich, and there were fewer fishing boats before. But now, the resources are thin and there are lots of boats.”

Fish-rich waters around Indonesia’s Natuna Islands have a long history of being contested, says Anton Leonard, a fisherman and exporter who is secretary-general of the Indonesian Fishermen’s Association representing traditional fishermen.

“Fishermen that come from Vietnam, Thailand, Malaysia and China have told native fishermen that Natuna waters are their traditional fishing grounds since the time of their ancestors,” says Leonard. “Local fishermen in Natuna could not resist their presence because some of them believe the claims, others because such vessels are much bigger, more advanced and sometimes also carrying weapons.”

Native fisherman haven’t been directly affected by South China Sea incidents that involve Chinese patrol boats, likely because they don’t venture far out into Indonesia’s exclusive economic zone, he says. But Indonesia’s crackdown on foreign fishing vessels in its waters and a policy against “transshipment” of fish between boats at sea has affected the livelihood of traditional fisherman because they have fewer opportunities to sell their catch. At the same time, the government lacks a comprehensive strategy to empower the fishermen and improve their industry, Leonard says.

“We are not afraid to face foreign boats coming into our territory,” Leonard said. “We’re eager to help the government and waiting to be involved in the defense of the country, even if only to be able to inform the local authorities about their presence within our waters.”

For five generations, Tran Lan’s family has been fishing in the South China Sea. He was 17 when he started going out in a small boat with his father. The family did well enough to buy two wooden trawlers for $90,000 each. His four sons, now aged 19 to 30, joined him.

The decades-old routine changed in the early 2000s when their boat was threatened and nearly rammed by Chinese maritime police four times near the Paracel Islands in South China Sea. They switched their fishing grounds to the less bountiful Tonkin Gulf, but still work in constant fear of being attacked by the Chinese.

“We have equipped GPS and navigation to identify Chinese boats so we can avoid them,” Lan says. “The last thing I want is to get too close to Chinese boats. They have bigger boats and definitely would outrun us.”

His boats were among about 1,000 anchored at Tho Quang terminal, the biggest in the central port city of Danang. He and others were busily readying their boats to go back to sea. Each expedition lasts up to 30 days, punctuated by two to three weeks in port to rest and repair boats and gear.

Vietnam, China and Taiwan all claim the Paracel Islands, which have been controlled by China since 1974. Vietnam has accused China of harassing and attacking its fishermen in what it says are traditional fishing grounds near the Paracels that they have been working for generations.

“I was fishing near the Paracel Islands for a long time, but the Chinese have sealed it off,” Lan says, whose family earns about $27,000 a year catching squid. “It was a good area for fishing.”