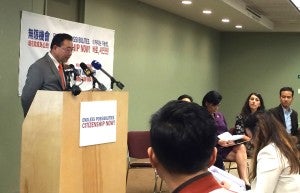 The first partnership event was a free citizenship workshop on Sunday, April 10 at the Long Beach Convention Center.

Among the campaign’s goals is to provide a fee waiver for the citizenship application process to those who qualify.

“I usually get 5 to 10 calls per day. I work Monday to Friday, and since I speak the language, [Tagalog] they feel okay,” said Sayno, community legal advocate for AAAJ-LA’s Asian Language Legal Intake Project (ALLIP).

“In the last six years, I’ve never seen so much momentum, so much excitement around naturalization, and at the same time, I’m a little disheartened to say that I haven’t seen so much divisiveness’ and animosity toward the immigrant community,” stated Nasim Khansari of AAAJ-LA.

She said further: “This is an opportune moment. This is the time we need to seize the moment and bring in our immigrant communities in Los Angeles County and beyond to help them to naturalize and exercise their right to vote, and not to just vote, but to be civically engaged.”

AAAJ is the nation’s largest legal civil rights organization for Asian Americans. It provides impact litigation, policy advocacy, leadership development, capacity building, and direct services such as citizenship application, language, and fee waiver assistance with other partners, such as the California Community Foundation, Office of Immigrant Affairs in Los Angeles, and local key figures and organizations.

“Has anything that a presidential candidate said got you really angry? Maybe them calling immigrants rapists and murders or saying all Muslims should be banned from the U.S.?” added Chu.

“Some statements can get you very upset, and yet there are some candidates that may want to do more for residents, like, for instance, have comprehensive immigration reform for a system that is so broken in the United States, that some immigrants in our Asian community have been separated from their families from for 20 to 30 years,” she said. “And there is no hope for a solution unless we have comprehensive immigration reform, but you know what, how do you make sure you have that right candidate? Through your vote.” 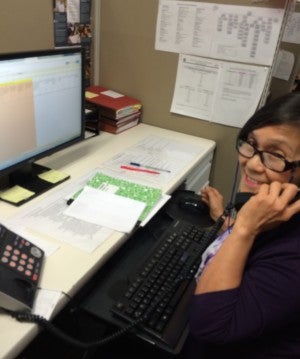 The Asian population is the second largest minority community eligible for citizenship in the United States. California has nearly 500,000 Asian American and Pacific Islander green card holders who are eligible to apply, of which more than 80,000 Filipinos who reside in Los Angeles County.

Speaking for Mayor Eric Garcetti, Dr. Linda Lopez of the Office of Immigrant Affairs, Office of Los Angeles, stated, “In recent years, we have seen more Asian and Pacific Islander legal permanent residents that have settled in the county [of Los Angeles], than any other county in California. That’s why ‘Endless Possibilities, Citizenship Now!’ is so important. It is an unprecedented campaign targeting the AAPI community to take a step a forward and apply for citizenship. I’m also here today, to share with our partners that the Mayor’s Office of Immigrant Affairs and Mayor Garcetti stand committed and prepared to help this campaign be successful in Los Angeles.”

Antonia Hernandez, president and chief executive officer of California Community Foundation, said, “We have done studies that indicate that within a few years, new citizens increase their income by at least 15 percent, and you ask why? Well, there are a lot of jobs [for which] residents are not eligible, whether that’s a police officer, teacher, some that require certifications in certain trades. So this opens up for individuals, and economic and collective wellbeing of L.A. County will increase significantly.”

Hernandez explained further: “The other important factor is that this is the sixth year of a decade. Soon we will be planning for the census. All of the federal money is distributed based on the census, and it is really important that people become citizens, [and that] residents apply for DAPA or DACA so that they don’t have to fear signing up and participating in the census.”