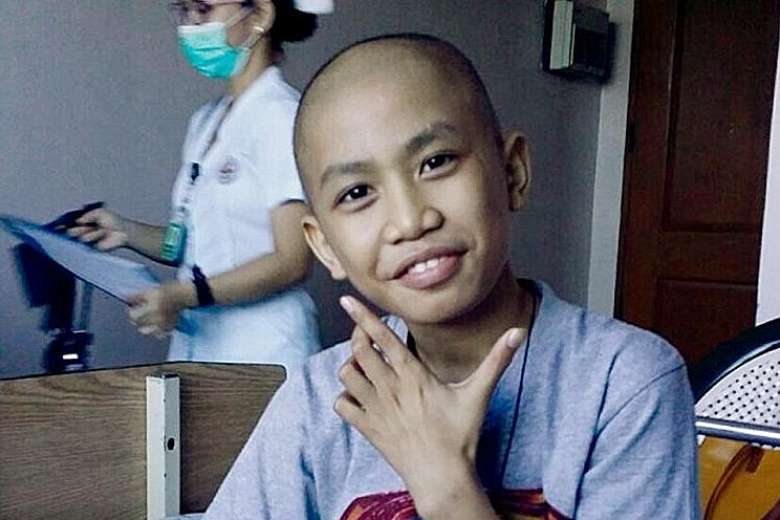 Filipina maid Mariza Canete said her son, Dave (above), who had a tumor, is more cheerful after surgery. PHOTO: COURTESY OF MARIZA CANETE/THE STRAITS TIMES

Almost two months ago, 10 year old Dave Caba was wheeled into a hospital in Cebu, Philippines, for an operation to remove a potentially fatal tumor in his left leg.

His mother, Mariza Canete, a Filipina maid who works in Singapore, said that when he awoke he exclaimed: “Yes! This is finally over.”

Although the nine-hour operation removed the tumor and replaced part of the bone with a metal implant, Dave is not entirely free of bone cancer. He has one more chemotherapy session to go, and months of physiotherapy ahead to help him walk again. Just last Friday, his blood platelets fell dangerously low and he had to have a transfusion–his third since his previous chemotherapy session early last month.

But even to reach this point is a “blessing,” his mother said. “He is now much more cheerful, no longer moody,” said the 30-year-old, who has three children.

Dave, who turned 11 last month, even asked for the bone the doctors removed during the surgery. “He wanted to smash it with his hand because it had been causing him so much pain,” she said.

Her husband cares for him round the clock after quitting his painting job in Saudi Arabia.

Canete said she is indebted to those who made Dave’s surgery and treatment possible. Over four months, nearly S$63,000 or P2.1 million was raised through two campaigns on American crowdfunding site Indiegogo’s charity platform Generosity.

It was started by Canete’s employer, Isabelle Claisse, and her friend, Adam Reynolds.

The two women also raised over S$30,000 (around P1 million) by shaving their heads.

Speaking of her gratitude to donors, an emotional Canete told The Sunday Times, “I do not know most of the people who have donated, but this is proof that there are a lot of good people in this world. I am so thankful and so blessed.”

Claisse said she was “blown away” by the amount raised and the number of donors, especially those who remained anonymous.

“There were people donating four-figure sums in US dollars. It gave me a lot of hope for human nature and made me feel warm.”