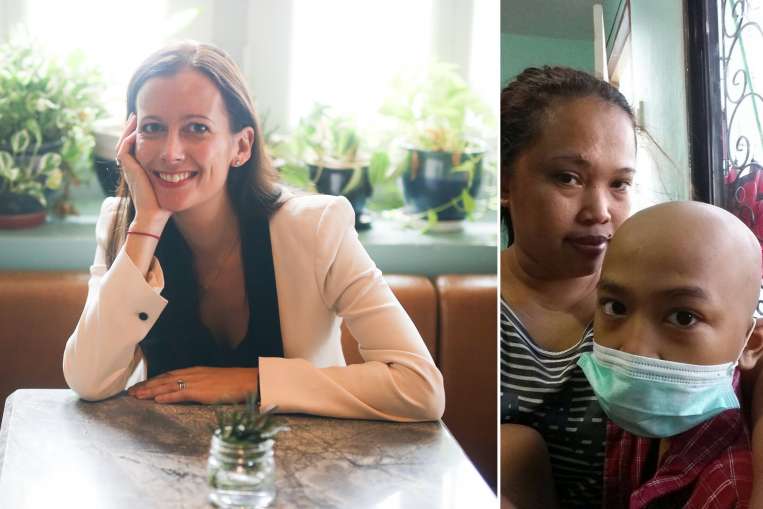 Lawyer Isabelle Claisse (left) will be shaving her head on Jan 13 to raise funds for her maid Mariza Canete whose son Dave Caba (both right) has been diagnosed with a potentially fatal cancer. PHOTOS: ONG WEE JIN, COURTESY OF MARIZA CANETE/THE STRAITS TIMES

SINGAPORE — Her maid, who has been with her for the past six years, is like family.

So, when corporate lawyer Isabelle Claisse found out last October that Mariza Canete’s youngest son has been diagnosed with bone cancer and that his family could not afford the treatment to remove a tumor, she decided to help.

Next week, she plans to shave her all her hair in a fund-raiser for the 10-year-old.

“It is a good way to raise awareness about cancer, even though it would be challenging to be bald at my workplace in a corporate environment. Mariza is very important to us,” said Claisse, 38, who moved to Singapore from London nearly nine years ago with her husband, a shipping lawyer. They are both British.

Doctors in the Philippines, where Canete is from, discovered a tumor in his left leg in October after Dave started complaining of a constant pain.

Claisse and her husband, 41-year-old Robert Driver, were forced to turn to the public for help as estimated surgery and hospitalization costs climbed to more than US$100,000 (P4,686,150).

Last month, they started a crowdfunding campaign on Indiegogo’s charity platform, Generosity.com, where about US$6,500 (P304,599) has been raised so far.

They also hope to reach out to more people through a fund-raiser event on Jan 13 at Harry’s, a bar in Boat Quay.

Claisse, Canete and a family friend, 49-year-old Adam Reynolds, who works in a bank, will be auctioning off the chance to shave their heads to guests at 10pm. The event is open to all, with a suggested minimum contribution and other activities like an auction.

Claisse’s family of four met Dave in 2014, when he and his two siblings spent three weeks in Singapore to celebrate Christmas with the family and their mother.

She describes him as a cheerful and mischievous boy who loves sports. But he is now uses a wheelchair and has undergone three chemotherapy sessions and multiple blood transfusions.

The operation to remove the tumor in Dave’s left shin bone, and replace the bone with an implant, is scheduled to take place on Jan 26. The chances of success are over 80 per cent, but without the surgery, Dave could die.

Claisse is aware that it might be difficult to hit the target sum of US$100,000. People have also told the couple that it was “crazy” to go to such lengths for their helper.

They are prepared to fork out the remaining sum if they cannot raise enough funds, even if it means taking on debt.

“But Mariza is family to us,” said Claisse. “I can’t imagine the alternative of saying, no, ‘I’m not going to give you money, your kid’s going to die.’

“A lot of people will probably think I’m soft about it, but it feels like a moral imperative to me to do everything I can.”

Canete, who is now in Cebu with Dave, told The Sunday Times she hopes Dave will be able to recover quickly after the surgery.

“I hope he can become the strong, positive boy that I know again. He loves mathematics and wants to become an engineer,” said the 30-year-old.

She had burst into tears when she found out about the lengths her employers were going to in order to help her.

“I don’t know where my son would be without them. Isabelle doesn’t treat me like a helper, she treats me like a sister. There’s nothing more that I could have asked for.”