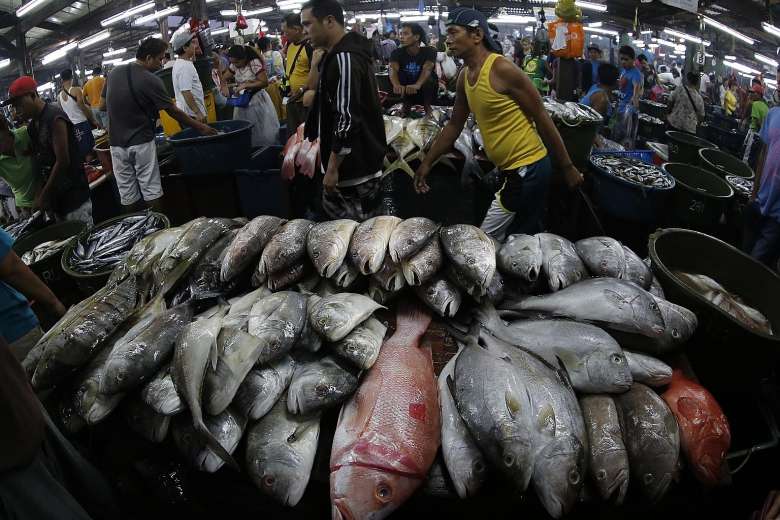 Fish produce at a market in Paranaque city in the Philippines. A growing appetite for fish and shrinking stocks are driving fishermen in countries around the South China Sea farther from their shores, often intruding into each other’s territories. Indonesia has caught 153 vessels for poaching in its waters since late 2014, including those from Vietnam, the Philippines and China. The Philippine coast guard has held fishermen from Vietnam and Taiwan. PHOTO: EUROPEAN PRESSPHOTO AGENCY/THE STRAITS TIMES

The already troubled waters of the South China Sea were further roiled recently by shoot-outs at sea and spats over illegal fishing. In the first of a three-part series, The Sunday Times’ foreign correspondents look at how intense competition over depleted fish stocks is adding fuel to tensions over territorial disputes in the area.

KOTA KINABALU (Malaysia) — The calm, sun-dappled waters off the capital of Sabah have long been a magnet for international tourists seeking diving adventures.

These days, the fear of deadly kidnappings by pirates from southern Philippines has cast a shadow over the allure of its colorful marine life beneath the waves.

But for commercial fishermen like Simon Hong, who sports a military-style crew cut, pirates aren’t his worry. Poaching fishermen from neighboring countries that ring the South China Sea are.

Jamali Basri, who heads the fishing community in the port town of Miri in the neighboring Sarawak coast, is more direct. He says that roughly 1,000 fishermen from the state live in fear of “Chinese gunboats” that are providing cover to Chinese commercial fishing boats as they muscle into their traditional fishing grounds of Luconia Shoal, about 100km from Miri’s shores.

“We’ve heard stories about how the Chinese (coast guard vessels) have rammed boats from the Philippines and Vietnam. We are scared and our navy is doing nothing,” he tells The Sunday Times. “Maybe if the navy plants our flags there and keeps a presence, our fishermen may be more brave.”

Flags to assert sovereignty won’t be enough to deter China. And the problem is expected to worsen as demand for fish rises and countries become more assertive in exercising their rights under their respective exclusive economic zones (EEZ).

Neighboring Indonesia has caught 153 fishing vessels for poaching in its waters since late 2014, including 50 from Vietnam, 43 from the Philippines and one from China. It regularly destroys these boats by blowing them up in highly publicized media events in a bid to deter poaching. Malaysia’s Foreign Ministry last week summoned China’s ambassador after some 100 Chinese fishing boats were spotted in waters just off Sarawak.

But the growing appetite for fish, coupled with shrinking stocks, is driving fishermen farther and farther from their shores. Argentina last month sunk a fishing trawler from China that it said was poaching in its EEZ.

The Food and Agriculture Organization (FAO) of the United Nations estimates the value of global fish trade last year amounted to roughly US$130 billion (P5.9 trillion).

As the population in China and Southeast Asia grows and consumers become more affluent and discerning about their diet, the pressure on wild fish stocks in the South China Sea will only worsen. “There will be less wild-caught seafood on the plate in Southeast Asia in the future and much more farmed fish,” says FAO’s fishery expert Simon Funge-Smith.

But fish farming is suitable only for certain forms of seafood such as bass, salmon and shellfish, not so for the much prized tuna and swordfish. It also has its downsides, including depleting smaller species such as anchovies used to feed the farmed fish and leaving poor coastal communities without even this cheaper form of protein.

According to a 2015 University of British Columbia study, the South China Sea produces at least 10 million tons of fish or 12 per cent of the global catch each year, but the true number is likely much higher as the data does not take into account illegal and unregulated fishing.

The depletion of fish stocks is of serious concern as seafood provides a major source of protein and income for millions of poor people in coastal areas. Shortages and increased competition also aggravate the problem in other ways. Unregulated trawling and illegal methods such as blast fishing destroy breeding grounds, racking up even greater problems for the future.

“It’s increasingly hard to catch fish. We now have to venture farther out into the seas,” said Chinese fisherman Li Zhongming, 38, from southern Hainan.

In the Philippines, 10 out of the 13 designated fishing grounds have been overfished. As a result, the population and size of small pelagic fish species, such as sardines and scad, are shrinking. Data from the fisheries bureau shows that the average daily haul of a Filipino fisherman has fallen to 4.76kg from as much as 20kg in the 1970s.

The main culprit has been industrial fishing. The Philippines has a fleet of about 1,000 commercial boats feeding a booming canned food industry and Japan’s ever-growing hunger for quality tuna. Each boat, in terms of fish haul, is equivalent to 65 outrigger canoes, and their larger nets typically catch fish too young to reproduce, threatening stock viability.

Vietnam is one of the world’s top five seafood exporters, together with Indonesia and Thailand, and has the world’s third largest fishery production and aquaculture industry after China and India. Including farmed species, Vietnam exported US$6.57 billion (P299 billion) worth of seafood in 2015.

Indonesia, home of the world’s largest tuna fishing grounds, produces more than 100,000 tonnes of tuna a year. But 90 per cent of the roughly 5,400 local and foreign vessels that ply the Indonesian waters have no permits, putting the sector’s losses to poaching at as high as US$25 billion (P1.2 trillion) annually.

The growing competition is fueling rows over maritime borders and fishery rights. China, Vietnam, Malaysia, Brunei and the Philippines–countries that form the perimeter of the South China Sea–are locked in territorial disputes. While countries can claim rights under the EEZs, there is Beijing’s nine- dash line that virtually claims all of the South China Sea as its own. Diplomats say Beijing is trying to add heft to its claim that the tongue- shaped nine-dash line represents the country’s “traditional fishing grounds” through the presence of large numbers of private fishing vessels protected by its coast guard.

“It is a clever strategy because the marine fishing industries in the region aren’t as equipped as the Chinese vessels which venture all over the globe,” says one diplomat.

Tension is stoked as Southeast Asian nations try to police their fishing grounds, leading to shoot-outs at sea. But it is a tough job as regional coast guard patrols cannot cope with their limited crew and equipment. Greenpeace oceans campaigner Vince Cinches noted that fishermen from southern Philippines have ventured more than 500km to the waters around the Indonesian island of Sulawesi. Often they fly the Indonesian flag to evade the coast guard.

The Philippines is itself a major victim to poaching. South of Scarborough Shoal, in the disputed Spratly archipelago, more than 300 Chinese fishing boats can be seen on any given day, according to Mr Eugenio Bito-onon, mayor of a town that covers a Philippine-held island in the Spratlys.

But it is not just the Chinese. In recent years, the Philippine coast guard has arrested fishermen from Vietnam and Taiwan. To protect its depleting maritime resources, the Philippines is acquiring 100 new patrol boats to add to the current 20.

In Indonesia, senior fisheries official Slamet Soebjakto told reporters last week that the government is planning to bar foreign vessels from entering waters considered breeding grounds. These will cover areas in Kendari, Sikakap and Natuna. “We want to maintain our sovereignty,” he said.