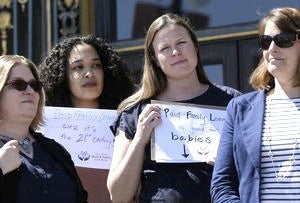 SAN FRANCISCO— In approving a novel paid parental leave policy, San Francisco officials buttressed their efforts to make life a little more affordable for workers who eke out a living in one of the most expensive cities in the country.

Mayor Ed Lee is expected to sign legislation approved Tuesday, April 5 by the Board of Supervisors that requires employers to provide fully paid six-week leaves for new mothers and fathers. Currently, the state of California pays about 55 percent of a worker’s salary when they take leave, which advocates say is not enough for working families.

The San Francisco measure requires employers with at least 20 employees to make up the rest.

“The vast majority of workers in this country have little or no access to paid parental leave, and that needs to change,” Supervisor Scott Wiener, who pushed the measure, said at a news conference before the vote.

Paid parental leave is the latest proposal to come from a city that has led the country on employee protections even as the cost of living soars. The median rental price in the five-county San Francisco metropolitan area was $3,350 in February, according to real estate data firm Zillow, and the median price for a home tops $1 million.

For example, San Francisco approved a $15 hourly minimum wage for workers in 2014, a mandate that California Gov. Jerry Brown signed into law Monday for the entire state.

In 2007, San Francisco officials required businesses to set aside money to be used toward employee health care, long before the federal government approved the Affordable Care Act.

And in 2006, San Francisco voters approved paid sick leave, the first in the country to require the benefit.

Some larger employers, such as Twitter and Netflix, already offer generous benefits for their workers but owners of small businesses say they don’t have such deep pockets.

“These are issues that need to be taken at the state level, and the state now is showing some appetite for dealing with these issues,” said Mark Dwight of Rickshaw Bagworks, a company of 30 employees that makes custom work bags in San Francisco.

But in the meantime, he said, “let’s make it a level playing field, for everyone.”

Attorney Jason Geller, managing partner of Fisher & Phillips San Francisco employment law office, said he expects retailers to pass on the costs to consumers who can and will pay higher prices in a bid to make the city more equitable.

“I am a business person and a resident of San Francisco, and I know that if they can pass on that expense, people will pay it,” he said. “We know that consumers in San Francisco will pay higher prices.”

Paid leave has become a topic in the presidential campaign as companies, especially in Silicon Valley, start offering better benefits. Twitter announced Tuesday that it would offer up to 20 weeks of fully paid leave for new parents in the U.S., starting May 1.

The U.S. lags other many countries in providing parental leave and is the only major industrialized nation that doesn’t require paid leave.

Kim Turner, a nonprofit attorney who took advantage of the state parental leave program, says full paid leave like San Francisco’s would have been better.

“I do think employers should be pitching in more,” she said. “I think we all need more help. It’s just so hard to make ends meet with little ones in the house.”

Read Next
NY consulate mails out PH poll ballots, voting starts April 9
EDITORS' PICK
Current dominant strain of COVID-19 more infectious than original—study
Water remains our saving grace right now
EuroMillions Superdraw: A lottery draw unlike any other is coming to the Philippines
DOLE: Return of OFWs’ remains from Saudi to be ‘delayed,’ deadline moved to ‘early next week’
Smart releases Hyun Bin’s second TVC
‘Justice will be done,’ Duterte assures as he vowed probe on Jolo incident to bare ‘truth’
MOST READ
Duterte tells military: No other president looked at you the way I did
Locsin warns of ‘severest response’ if China’s army drills in SCS ‘spill over’ to PH domain
Man who stole 2 cans of luncheon meat lands in jail in Manila
VP Leni Robredo: ‘Remember, you were made for these times’
Don't miss out on the latest news and information.