FilAms sympathetic to Obama: ‘Give him time’ 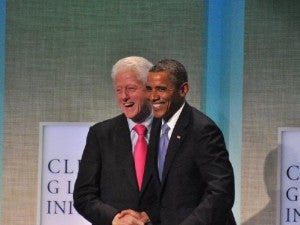 “In a very strange way I am sympathetic to the dilemma he faces as our nation’s leader,” said lawyer Vonz Santos. “He came into the presidency in the early stages of a giant economic meltdown and has had to deal with it unfolding without an end in sight.”

Santos is one Filipino-American who does not believe the conventional punditry about Barack Obama’s perceived weakness, caving in to the GOP over major proposals on health care and the economy and essentially bending over backwards for the sake of bipartisan cooperation.

“Weakness is a form of corruption,” he said. “There have been far too many scandals under the watch of the Bush(es). Policy leadership with good governance is always tougher for big leaders when you can’t give incentives to calm your opposition, and especially with issues where so much money is involved.”

Another voter willing to give Obama the benefit of time is Dr. Kevin Nadal, deputy director of Forensic Mental Health Counseling at John Jay College of Criminal Justice. He thinks people are prone to criticize Obama because he wasn’t creating change quickly enough.

“What they fail to recognize is that he inherited one of the worst economic situations that any president has ever had to face,” he said. “I trust that our president will be able to get us back on track. It just might take another four years before we see actual results. Let us not forget that it took us over 10 years after Clinton’s presidency to see the results of his efforts.”

Obama was all over New York this week, drumming up support for his proposed American Jobs Act. On September 21, he spoke before the 66th United Nations General, keynoted the annual Clinton Global Initiative, and appeared at a fundraising dinner.

“This bill answers the urgent need to create jobs right away, and I appreciate President Clinton’s strong support of this plan. He knows a good jobs plan when he sees it. He created more jobs in his tenure than just about anybody,” he said.

Christina Baal, director of Civic Engagement and Field Operations at the non-profit New York Immigration Coalition thinks Obama remains pigheaded about immigration, one of his election issues that has remained an “unfulfilled promise.”

“He has the power to create great change even without Congress,” she said, but he “didn’t exercise that power to end the suffering of immigrant communities.”

Obama counts universal health care, the repeal of Don’t Ask Don’t Tell policy allowing gay soldiers to serve in the military, and the Fair Pay Act equalizing wages for both men and women, among the important pieces of legislation passed by his government.

The killing of Osama bin Laden happened under his watch.

“I do not believe he is weak,” Santos said. “He is just trying to do the right thing.”