Aquino on top of situation as ‘Pedring’ lashes Philippines 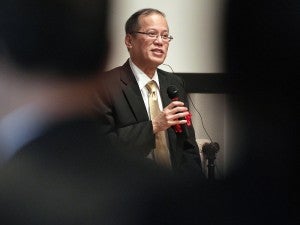 President Benigno Aquino, who is on a four-day visit in Japan, gives a speech in Tokyo Tuesday. Malacañang said the President remains on top of the situation as Typhoon Pedring batters the country. AP

MANILA, Philippines—President Benigno Aquino, who is still in Japan on a working visit, remains on top of the situation as Typhoon “Pedring” battered Luzon, Malacañang said Tuesday afternoon.

“I have been in touch with Secretaries (Corazon) Soliman, (Voltaire) Gazmin, and (Jose Rene) Almendras. I have instructed the Executive Secretary (Paquito Ochoa) to compile information from (the National Disaster Risk Reduction and Management Council) and to inform our people of conditions as well as of government efforts to mitigate the effects of the storm,” said Aquino in a statement that Presidential Spokesperson Edwin Lacierda read in Malacañang.

“I am in constant touch with these members of my Cabinet and the Executive Secretary has been instructed to keep me and the public informed of conditions pertaining as well as mitigation efforts,” he added.

Lacierda said the President is so involved in the disaster management efforts that he is aware of a wall that collapsed in Metro Manila.

The Palace official also said he has information that Aquino has spoken with Marikina Mayor Del De Guzman.

Marikina, which lies in a valley, is highly prone to flooding during typhoons and heavy rain and subsequent overflowing of the Marikina River. As such, it was one of the cities in Metro Manila hardest hit by massive floods wrought by Tropical Storm “Ondoy” in Sept. 2009.