National actions in U.S. to mark Fall of Bataan 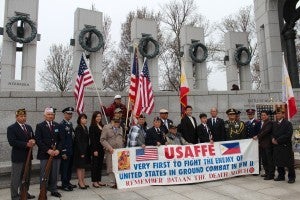 WASHINGTON, DC – Supporters of Filipino World War II veterans across the country are holding a series of events to honor the heroism of more than 260,000 Filipino and American soldiers who fought for the United States in the Second World War.

April 9 marks the 74th anniversary of the fall of Bataan, one of the critical moments of World War II in the Pacific theater. In the Philippines, the Day of Valor (“Araw ng Kagitingan”) is recognized as a national holiday.

In San Francisco, Clif., the Philippine Consulate General, the Bataan Legacy Historical Society and Memorare-Manila 1945 Foundation will hold a Day of Valor Commemoration and open a Special Exhibit on World War II in the Philippines. The Exhibit will run from April 11-29, 2016.

In Washington, DC, FilVetREP will take part in a program of commemoration hosted by the Philippine Embassy on Friday, April 8.

Other actions nationwide include a #RecognizeBataanValor and #RecognizeFilVetValor social media campaign to secure co-sponsors to the Congressional Gold Medal legislation; letters and phone calls from around the country to lawmakers; and Op-eds on HuffingtonPost.com and other national publications.