‘So it was okay to shoot them?’ | Global News

‘So it was okay to shoot them?’ 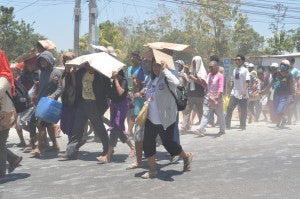 President Aquino has yet to comment publicly on the violent dispersal of farmers in Kidapawan as I’m writing this.

I hope he crafts every sentence carefully based on how well his words would hold up against the critical question about the tragedy: ‘So it was okay to shoot them?’

That’s what his spokespersons should have done. Instead they turned to shallow red-baiting in an attempt to justify what appears to be an arrogant and deadly show of force.

“The leftists have been at this game for the longest time,” Edwin Lacierda said in a statement posted on the Liberal Party’s Facebook page.

I have great respect for fellow journalist Manolo Quezon, so it was puzzling why he then echoed the same line in a press briefing, saying: “It’s very clear that the background to this whole, sad, and tragic incident is that the farmers mobilize among those who participated in mobilization are many cause-oriented groups, you know from the militant left.”

A more sensible government response came from Chito Gascon, head of the Commission on Human Rights, who stressed the need for an “exhaustive” investigation, even as he spoke to the aspect of the incident that many find most enraging: Why in the world did the police open fire on poor farmers who staged the protests because their families were starving?

“Pending the results of an exhaustive fact-finding report undertaken by CHR investigators, law enforcement personnel should not be using live ammunition in crowd dispersal operations,” Gascon told the INQUIRER.

The police, he said, “should have been conscious of all persons’ rights to their safety and security, as well as the ability of the law enforcers to self-defense.”

And that’s true especially for people reeling from economic devastation and hunger. And yes, even those who chose to align themselves with the militant left.

There’s much speculation in social media that the militant left pushed the confrontation, using the farmers as pawns in a cynical political game.

Even if that turns out to be true, it’s a game that they could play only if they were dealing with a trigger-happy security force led by a government insensitive to the plight of marginalized, poor and struggling citizens.

A Malacanang statement on the dispersal is not encouraging.

“The protesters were offered to go to their barangays and register for the cash and work program, and receive family packs from the DSWD (Dept. of Social Welfare and Development), but they refused,” the Aquino administration said.

As the Redemptorist Church pointed out in a statement condemning the dispersal: “We cannot accept that what you give to those who are hungry is an offer to voluntarily dismantle and disperse their barricade. It is indefensible that when the farmers assert their rights it is okay for the police to simply transform into a murderous frenzy for they cannot stomach the rights of others.”