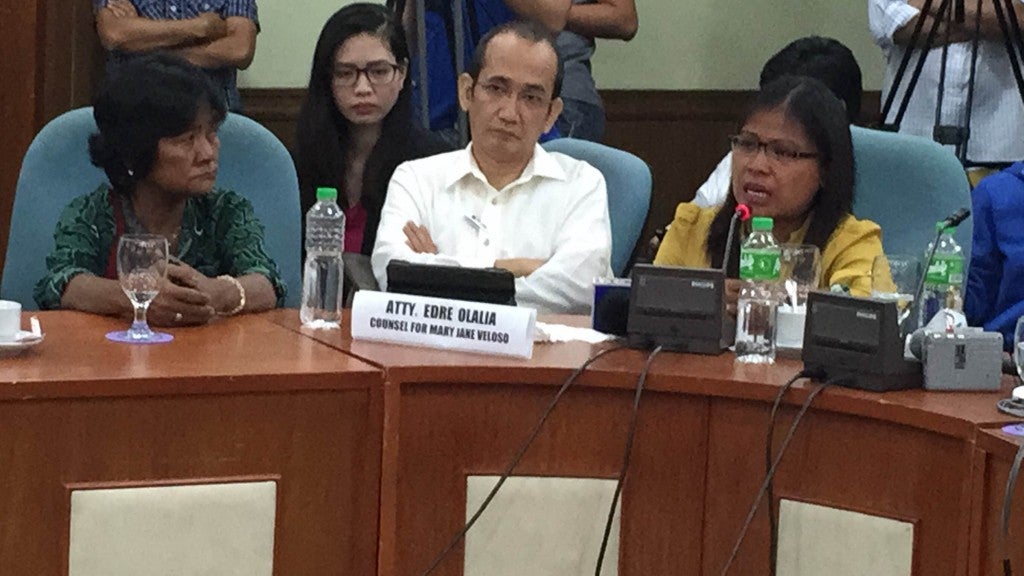 Maritess, the sister of Mary Jane Veloso, breaks down in tears during the House of Representatives probe on the plight of her sister, who was convicted to death for smuggling heroin in Indonesia but whose execution was later deferred. MARC JAYSON CAYABYAB

STO. DOMINGO, Nueva Ecija–The sister of convicted drug trafficker Mary Jane Veloso testified on Tuesday that Veloso’s suspected recruiter Ma. Cristina Sergio was responsible for the trip that led to her arrest and subsequent conviction for illegal drugs in Indonesia.

Maritess Veloso-Laurente, 36, took the witness stand at the resumption of the hearing of the human trafficking and estafa charges Sergio and Julius Lacanilao at the sala of Judge Nelson Tribiana of the Regional Trial Court Branch 37 here.

Laurente said Veloso had given her and their parents a full account of Sergio’s supposed offer to grant Veloso an overseas job.

“Ma. Pa, ate (sister), Ma. Cristina offered me a job in Malaysia. She said I would be paid a monthly salary of P25,000 and I could leave for work within five days,” Laurente said in Filipino, quoting a conversation she had with Veloso on April 16, 2010.

To proceed to Malaysia, however, Veloso was required to produce P7,000 for plane fare, Laurente said.

Despite the reservations aired by Veloso’s brother, Christopher, Laurente said, their mother Celia believed it was a good opportunity for Veloso who had a passport handy.

According to Laurente, Veloso asked for a hug on April 21, 2010, before she left for Manila. “She told us not to worry because Ma. Cristina would not betray me,” she said during direct examination by lawyer Rey Cortez of the National Union of Peoples’ Lawyers. NUPL serves as counsel for the Veloso family.

On April 27, 2010, Laurente said, Sergio informed them that Veloso was hired by a good employer.

But on May 11, 2010, Veloso sent them text messages begging for help. When they called, Laurente said Veloso was crying. “She told me she had been in jail since April 25, 2010,” she said,

When Veloso’s family confronted Sergio at Lacanilao’s house, Sergio allegedly promised to get her freed within three months, Laurente said.

The Veloso family sought government assistance when Sergio failed to fulfill her promise, she said. TVJ