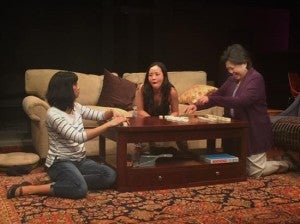 In one family, Vera (Katigbak) plays referee to her two daughters, over-achieving neurologist Momo (Villarin) who disapproves of photographer Twee (Chilip) living back at home after using up her grant money on a trip to India.

In the other family, cardiologist Rod and his brother JJ, a comics illustrator who likes to draw aliens with genitalia, deal with their father Ernie (Gonzalez)’s heart attack. Also, Rod’s fiance Henry just called off their engagement.

Peña, who is also Ma-Yi’s producing artistic director, summarizes: “Two sisters. One might be lesbian. Two brothers. One gay couple. Two Filipino families. One big bag of crazy. Meantime, there’s plenty of monopoly, mahjong, and gin rummy to keep them all busy.”

The families in “House Rules” go on to explore the rules of these games, including sungka, a traditional Filipino game, and the rules of living.

Peña recently directed “The Wong Kids in the Secret of the Space Chupacabra Go!” for ArtsEmerson in Boston and “Macho Dancer: A Musical” at the 2015 Virgin Labfest in Manila.

Pamatmat declares: “You will laugh all the laughs and feel all the feels but still have plenty to chew on when the night is through.” 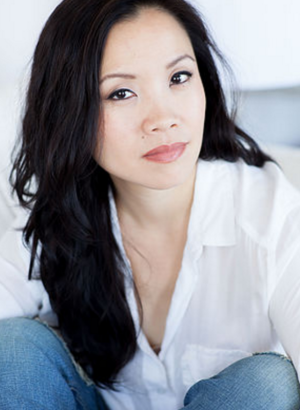 His most recently staged plays are “all the terrible things I do” by About Face Theatre in Chicago and “Edith Can Shoot Things and Hit Them” by Company One Theatre in Boston.

Chilip is thrilled to be working with Ma-Yi again. “The first time I saw a Ma-Yi production was ‘The Romance of Magno Rubio.’ I was just blown away and felt this deep pride. So much of theater and mainstream media is white, and you get used to it and complacent with it. Then one day, I got to see something that’s representative of where I came from and it was so beautifully done. Why can’t more theater be like this?

“I’ve watched almost every Ma-Yi show since I moved to New York. They do amazing work and are really committed to developing Asian-American writers, which is so important if we’re to have more diversity and Asian representation on stage here in the US.

“In this production, I get to collaborate with these insanely talented people whose work I’ve admired. I’m really proud to be working alongside them.”

Born and raised in Manila, Chillip has been in Ma-Yi’s revival of Peña’s play “Flipzoids” and in Huntington Theatre’s staging of Pamatmat’s “after all the terrible things I do” in Boston. Regional credits include “Our Town” and “Chinglish” for Portland Center Stage and “The Intelligent Homosexual’s Guide to Capitalism” for Berkeley Repertory Theatre. She’s also been on TV shows “Mysteries of Laura” and “Royal Pains.”

Chilip was also in David Henry Hwang’s “Golden Child” in Manila for Tanghalang Pilipino in 2008, for which she received a Philstage Gawad Buhay! citation for Best Performance by an Actress in a Lead Role.

“As an actor, [playing a Filipino character] is no different from how I approach any material,” she says. “But on a personal level, I’m incredibly happy when Filipinos are portrayed in mainstream theater, whether I’m the one playing them or not.”

She also wants to point out that she has one brother and two sisters in real life. “And I’m really close to them. Definitely not like how the two sisters are in this play!” she adds, laughing.