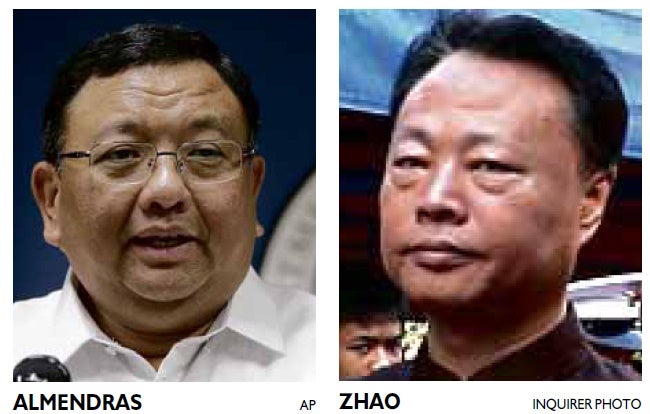 NEWLY appointed Foreign  Secretary Jose Rene Almendras met with China’s ambassador to the Philippines Monday to discuss the bilateral relations between the two countries—except matters concerning the dispute in the South China Sea.

He said the South China Sea conflict was not taken up during the meeting, which was a courtesy call for the new DFA chief.

To illustrate the tone of the meeting, Almendras repeated a joke he had made earlier this month:  “I was only going to ask him about feng shui and if the position of my table at the office is correct.”

In a press briefing before the meeting, Almendras said: “He (Zhao) is a friend… the first thing I will tell him is ‘welcome to the DFA…’ the last time we met I was still in the Palace.”

Almendras served as Cabinet secretary and secretary of energy prior to his appointment to head the Department of Foreign Affairs.

Pressed on whether he would take the opportunity to bring up a recent report that Chinese vessels had rammed a boat carrying Filipino fishermen near the contested Panatag Shoal, Almendras said he would not.

“I cannot bring it up with the Chinese ambassador later because I have not received official verification from the Department of National Defense on whether it did happen and in what context,” Almendras said prior to his meeting with the Chinese envoy.

“I’m not saying that our fishermen are lying. It’s just that procedure and protocol require us to validate and vet it before we start doing the immediate action,” Almendras said. (See story on Page A8.)

Almendras was appointed by President Aquino as ad interim foreign secretary on March 8, a day after Albert del Rosario formally stepped down due to health reasons.

A trusted friend of Mr. Aquino, Almendras was described by Del Rosario as the “man who gets things done.”

Asked about details on the five military bases the US military would be given access to under the Enhanced Defense Cooperation Agreement, Almendras said he had yet to be briefed on the matter.

With close to three months before the end of the Aquino administration, Almendras said his entry into the DFA did not mean a change in foreign policy.

In fact, he said, his job is to manage the plans that had been laid out by his predecessor.

Almendras’ appointment comes at a crucial time when the DFA is awaiting the ruling of The Hague-based arbitral tribunal in the case initiated by the Philippines against China’s expansive claims over almost the entire 3.5-million-square-kilometer South China Sea.

The Philippines has protested China’s nine-dash-line, which delineates its territory on its official map, and  encompasses the Spratly islands and other islets and shoals also claimed by the Philippines and other Southeast Asian Countries.

Claimants include Vietnam, Taiwan, Malaysia and Brunei.  Japan also contests some of China’s other territorial claims.

The Philippines is pushing for international arbitration in the matter and also hopes the regional Association of Southeast Asian Nations (Asean) will play a major role in peacefully settling the issue.