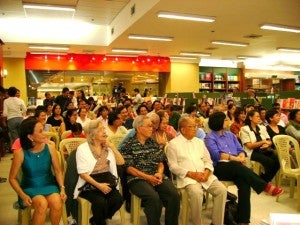 Senator Jovy Salonga at the 2006 launch of “U.G. An Underground Tale,” for which he wrote the foreword. Seated next to him are Joy Jopson Kintanar and Hernan and Josefa Jopson.

Jovy Salonga’s greatness was, in a way, symbolized by his scarred left eye.

It was the result of a cynical act of political violence which highlighted his wisdom and courage in dealing with a major political force: the Left.

We should revere Salonga not just because he helped lead the fight against dictatorship and for Philippine sovereignty.

He was also a visionary leader who, throughout his career, worked with and inspired young Filipino progressive activists — even those from a movement whose leaders once tried to kill him.

Salonga was one of the victims of the infamous bombing at Plaza Miranda in 1971, the attack that killed nine people and wounded hundreds of others. Among those who died was a 10-year-old boy selling cigarettes at the Liberal Party miting de avance.

For years, many believed it was part of a series of terrorist attacks unleashed by Ferdinand Marcos as a way of later justifying the declaration of martial law.

Then, in 1986, came stunning allegations that the Communist Party leadership, including founder Joma Sison, were behind the bombing.

Salonga himself publicly blamed Sison for the Plaza Miranda bombing in his 2001 memoir “A Journey of Struggle and Hope.”

Sison dismissed Salonga’s claim as the result of “an obsession” and “a psychological problem.” “I think he’s so driven by his obsession that he is unwittingly exculpating Marcos,” he told the Philippine Daily Inquirer.

The idea that Salonga would be so obsessed with a serious allegation that he would include it in his own memoir is hard to accept.

Like the two other giants of the anti-dictatorship opposition, Senators Jose Diokno and Lorenzo Tanada, Salonga was a renowned intellectual and respected scholar.

Ka Jovy took scholarship and writing seriously. I realized this 10 years ago when he agreed to write the foreword for my book, “U.G. An Underground Tale,” about the life and times of activist Edgar Jopson.

I knew the senator, who was then in his mid-80s, was a very busy man, and I was expecting him to write a short essay of no more than 700 words.

But Jovy Salonga didn’t take the assignment lightly. And he had a lot to say. His foreword was more than 6,500 words long, a detailed review and critique of “U.G. An Underground Tale.”

My book delves into allegations about the CPP’s role in the Plaza Miranda, including how it troubled Ed Jopson when he was already a ranking Party member.

In his foreword, Salonga writes: “The book says that if the accusations are true, then the debate over the bombing – the biggest unsolved crime in the Philippine history–– ‘also highlighted an ironic twist in modern Philippine history: it meant that Marcos, who is remembered as one of the most ruthless liars in the country’s history, was actually telling the truth when he denied having anything to do with the attack.’”

“I have quite a different interpretation––there is very little difference between Marcos and Joma Sison: Both had been playing God. In a sense, both were terrorists, as defined by the CPP/NPA itself. As the book reminds us: ‘The radicals who joined the CPP and the New People’s Army viewed armed struggle as the highest form of sacrifice for the revolution. But they also embraced another basic principle: taking up arms must never include acts of terrorism. Bombing a demonstration and killing innocent civilians were unacceptable.”

This brings us to one of the things I admire most about Salonga: Despite what he discovered about the bombing, despite the physical damage the crime caused to his face, he never launched into a sweeping condemnation of the young activists who aligned themselves with the Left. He never resorted to the mean-spirited red-baiting that other small-minded politicians who endured what he did would have done.

Jovy Salonga had such a powerful intellect, and had such a huge heart, that he saw clearly that the rank-and-file activists of the Left did not share the capacity for dogmatic violence of the movement’s leaders. 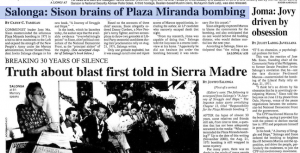 In fact, he didn’t just accept the young activists, he helped celebrate their heroism.

Salonga was one of the founders of Bantayog ng Mga Bayani where many of the progressive activists, including Edjop and others who joined the UG movement, have been honored for their sacrifices.

In his foreword, Salonga demonstrated a deep understanding what moved these young Filipinos to take the radical path — and of the limitations and pitfalls of the road less traveled.

“In my view, Christians in the Philippines where massive, grinding poverty exists and where the yawning gap between the many poor and the few rich has been worsening, may fall under three categories: Those who were so enamored by armed struggle to liberate the exploited poor they soon forgot the abiding presence of God in their lives; those who isolate themselves from the cause of the poor and the helpless and build their own private stairway to heaven. They prefer to just pray and worship God in adoration and praise; those who place God at the center of their lives and at the same time come to the succor of the poor, the wounded and the powerless.”