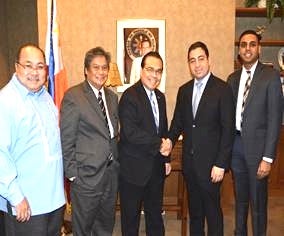 De Leon reported the community’s attempts to get legislators’ support for Filipino veterans, particularly Senate bill 1555 or the Congressional Gold Medal Award for Filipino Veterans of World War II. He emphasized how such a recognition would honor the valor and service of Filipino veterans who now number less than a few thousand still alive in the U.S.

Mallonga noted that the Filipino veterans were the only notable minority group not recognized for their contribution to Allied victory in the Second World War, unlike the Tuskegee Airmen, Japanese Nisei, Puerto Ricans and others who have been honored for their service.

De Leon and Mallonga also reported on an initiative to increase the number of Filipino American voters for the U.S. general and local elections this year and beyond.  There are currently about 3.4 million total of Filipino Americans in the U.S., out of which 340,000 reside within the Northeast U.S. region, and 120,000 in New Jersey.

Thus far, only 23,000 Filipino-Americans within the Tri-State region have registered to vote, according to Mallonga, who said his group is holding registration drives throughout the year.

George Helmy remarked that the Filipino American population in New Jersey was well-educated, community-oriented and well integrated into the New Jersey public and that Sen. Booker was very keen on forging closer ties with the community.

De Leon cited the presence of several Filipino-owned small businesses in New Jersey and also brpight up the ongoing diplomatic row with China on the maritime entitlement issues of the West Philippine Sea. Helmy and Suryawanshi promised to relay the community’s concerns with Sen. Booker.

The meeting with Sen. Booker’s representatives stemmed from a meeting the Philippine Ambassador to the U.S. last January, in which the New York Consulate General and NaFAA agreed to partner in forging the Filipinos community’s ties with U.S. legislators in pursuit of Filipino American concerns.