Al Gore to ‘climate warriors’: We only have years to make large change 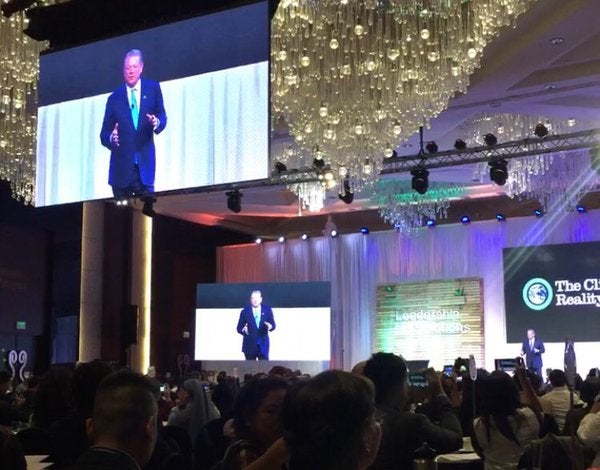 Al Gore says the human race has years, not centuries to change as we experience global warming. Kristine Sabillo/INQUIRER.net

FORMER United States vice president Al Gore on Monday rallied hundreds of “climate leaders” to take on the “extraordinary challenge” of convincing people from different parts of the world to address climate change.

“We’re in an unusual situation in our world. We have to make a very large change. And we have to do it in a ridiculously short period of time,” Gore said during the first day of the Climate Reality Leadership Corps training held in Sofitel, Manila. “I say ridiculously because we’re used to making changes these large over centuries.”

“We don’t have centuries. We have years. And each day matters,” he told more than 600 participants, some of whom flew into the country to attend the three-day workshop.

The founder and chairman of the Climate Reality Project said the task of the group “is daunting to say the least.”

“It’s an extraordinary challenge. But we are winning. We are succeeding. The real question is how much longer will it take to complete this transition,” he explained.

Gore emphasized that the change should start from the grassroots.

“But what makes it happen, what makes that change occur is your passion, coupled with the knowledge that you are gaining from one another, from the presenters here and from this experience that is beginning this morning,” he said.

The 31st Climate Reality Leadership Corps Training is the first to be held after the historic climate change pact was signed in Paris last December.

Corps director Mario Molina said the agreement will require leadership to push for the implementation of the different nations’ commitments.

There are now more than 9,000 climate leaders in 135 countries, according to Ken Berlin, president and CEO of The Climate Reality Project.

The participants are expected to share their knowledge about the effects of and solutions to climate change after they finish their training.

The Philippines is considered the face of countries vulnerable to climate change. As president of the Climate Vulnerable Forum, it played a critical role in the climate negotiations in Paris.

During his presentation, Gore showed how the Philippines is one of the most vulnerable countries to climate change. He also gave examples on how other countries like the United States are being affected by extreme weather and changes in water and air temperature.